Robert Morris, Howard settle for tie under the lights 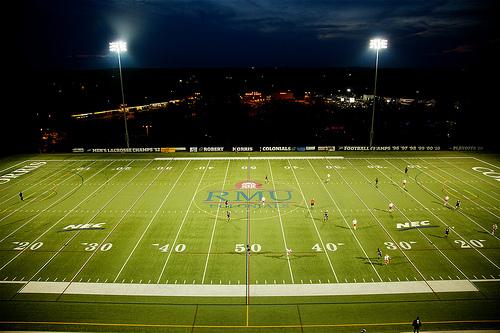 The Robert Morris University women’s soccer club has played in over 180 home games during the program’s 20 year history, but the team has never played a contest quite like Friday night’s match. For the first time ever, the lady Colonials competed in a game under the lights at Joe Walton Stadium, settling for a 0-0 draw against the Howard Bison in double overtime in front of 602 fans.

The Colonials, who had 20 shots on Howard net minder Kyra Dickinson, could not find the back off the net, and as a result, fall to 0-4-1 on the season.

“Their goalie made so many amazing saves. It was just hard to get shots passed her,” explained RMU senior forward Ayana Davis.

Robert Morris had plenty of chances early in the game, including a shot toward a wide open net by Cassie Raymond from 10 yards out that went wide of the goal.

Although the Colonials offense controlled possession of the ball for most of the night, freshman goalie Chelsea de Jager kept RMU in the contest by stopping three shots en route to her first career shutout.

The Colonials had a golden opportunity in the 60th minute when Katie Austin’s corner shot from eight yards out was turned away by Dickinson.

Despite being fatigued, Austin kept going hard throughout the game for the fans. “They kept our spirits up. Even when we were tired, they kept cheering,” said Austin.

After a scoreless two halves of soccer were in the books, a 10 minute overtime period was added. Despite having plenty of chances in OT, RMU couldn’t go on the offensive and sneak one behind the Bison net minder.

Fouls were a big part of the reason that Howard had a few opportunities late in the match. The Colonials committed 16 fouls during the course of the game, compared to HU’s 10, and while arguing a play, Robert Morris skipper John Kowalski received a red card with three minutes remaining in the first extra period of play.

The contest then went to a second 10 minute sudden death period after neither team managed to score during the first 100 minutes of play. At the 3:30 mark of the final overtime, RMU had its best chance of the night to win the game, after a kick from the 20 yard line went sailing past the defenders, but was knocked out of play by Dickinson’s last second leap to preserve the tie for her club.

Despite the fact that Colonials were unable to walk away from their first home night game with a victory, the fans came out in full force to support the team, including several members of the men’s and women’s basketball, lacrosse, hockey and tennis teams, as well as the field hockey program and men’s track squad.

Junior Leah Prentice believed that the support of the fans kept RMU going late in the game. “Hearing everyone pumped us up and it made us work harder. It’s definitely a boost to be playing under the lights and having our fans here is always fun.”

The Colonials will look to secure their first victory of the season when crosstown-rival Duquesne comes to the North Athletic Complex for a 1:00 p.m. start on Sunday, and then Robert Morris travels to Colorado Springs to take on the Air Force Academy and Colorado College respectively.