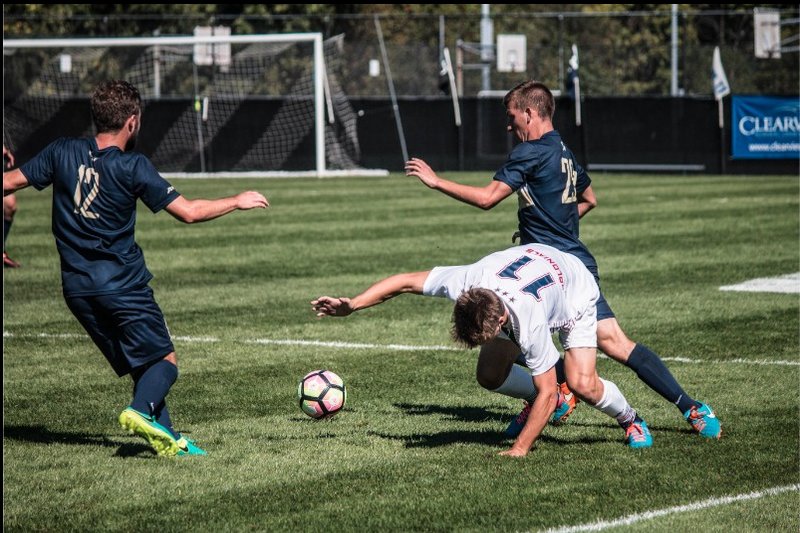 Sunday afternoon, the men’s soccer team took on Central Connecticut State at the North Athletic Complex. With rain coming down steadily throughout the match-up, field conditions certainly played a factor as the Colonials came out on top by a score of 1-0.

Central Connecticut came out of the gates strong, as its corner kick just a minute into the game resulted in a Halvard Ramstad header that missed high over the goal. With the score remaining 0-0, the teams traded shots and fouls for the rest of the first half.

In the first half RMU outshot the Blue Devils 10-6, but the goalkeepers only combined to make five saves. Winter Fondi started for the Colonials in goal and made four saves in the contest. In the net for Central Connecticut was Carson D’Ambrosio, who made five saves in the game.

Four cards were handed out in the game, including yellow cards to RMU’s Zach Graziani and Eddie Thomas.

The second half started in a similar manner as the first. Just two minutes into the second half, the Colonials got a corner kick. Unfortunately, it did not result in a shot for RMU.

About ten minutes into the second half, the third card of the game was given to CCSU’s James Randall. Randall also shared the lead for the team in shots in the game with Andres Muriel, both with five shots.

Eventually, in the 69th minute of the contest, the first and only goal of the game was scored. Bayley Winkel, assisted by Lucas Puntillo, scored his first goal of the season to give the Colonials a 1-0 lead.

Robert Morris didn’t have any shots for the rest of the game as the Blue Devils tried to mount a comeback. Luckily for the Colonials, their back line wouldn’t budge and most of Central Connecticut’s shots missed wide.

In the 88th minute, Graziani received his second yellow card. Therefore, Graziani was shown a red card and was sent off the field. Due to the red card, he will miss the team’s next game.

Overall, it was Winkel’s lone goal that would be the deciding factor. The Colonials won the game 1-0 despite being outshot 20-16. The win improved the team’s record to 4-9-2 overall and 1-4-1 in the Northeast Conference.

They now stand in seventh place, tied with Central Connecticut State. Their next game is home against James Madison on Oct. 31.