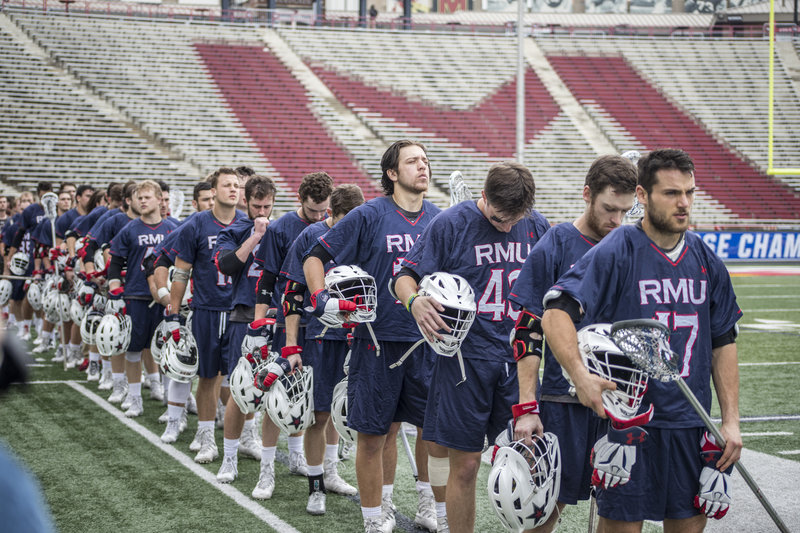 After the Robert Morris men’s lacrosse team finished their 13-4 season, which is also their best season to date, they then moved into the NEC tournament, where they defeated the Bryant Bulldogs in the semifinals. The team would beat St. Joseph’s 9-8 in overtime off the stick of sophomore midfielder Tyson Gibson. This would win them the NEC title and punch a ticket to their first-ever NCAA tournament, where they would face off against Canisius in the opening round.

During the Colonials’ game against Canisius in the regular season, they were able to walk away with a close 11-9 win. While their game in the opening round of the tournament wasn’t as close, as they took a dominant 12-6 win, earning them a date with the No. 1-ranked seed in the country and the defending champions: The University of Maryland.

After two possessions for both teams ended with no goals, Adam DiMillo finally got the scoring started for the Terrapins to take a 1-0 lead. The Colonials answered back with a goal by Jimmy Perkins, and they didn’t stop there. With goals from Shane Majewski, Eddie Smith, and another from Jimmy Perkins, the Colonials found themselves with a 4-1 lead shortly after the second period began, and a 6-3 lead going into the half.

The Terps came out swinging after the first half ended, and it looked like they had finally begun playing their game. With four goals in the first four minutes of the second half, the Colonials again found themselves down a goal, and although a goal from Matt Schmidt equalized the game at seven apiece, the Terps didn’t stop their barrage. For the last 12 minutes of the fourth quarter, RMU was unable to pull within one goal despite still scoring four times, due to the Terps controlling the tempo and playing a faster game. One reason for the day-and-night difference for the Terps was their faceoffs: RMU won five in the first half, while UMD won six. The second half was a different story, seeing UMD win 17, while RMU only won seven.

The game ended 14-11 thanks to UMD’s 11 goals in second half, which ended the Colonials’ best season to date, and first-ever NCAA tournament appearance. The second half seemed like two entirely different teams going at each other. Where the first-half Colonials played like they wanted to win infinitely more than the Terps, the second-half Colonials played like they had run out of energy and couldn’t put up any sort of defense.

After the game had ended, RMU President Chris Howard, who had traveled from Moon for the game, gave the team a few words of encouragement. Although the Colonials lost, they had their best season ever, going 16-5 including tournament play, as well as winning their first-ever NEC championship, and since they are only losing nine seniors, this group that made it this far will come back next year with a chance to go even further.