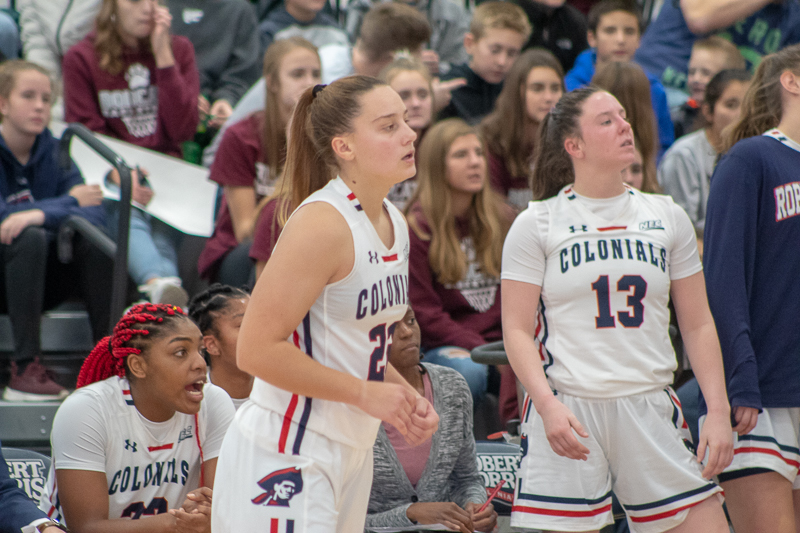 “We practiced well the last three days coming back from that JMU,” detailed Coach Buscaglia. “That was a big focal point on the confidence to go on the court today that we were going to play well. Whether we won or lost, it was the confidence that we were going to play hard and well because of how we practiced. The ducks were in a row because we put in the work at practice. Win or lose I knew we would play hard.

The Colonials looked like the Colonials of old from the start. The great defense that RMU is known for has been dormant in recent games, but thr new year woke up the defense as Robert Morris forced four quick turnovers. The defense help propel Robert Morris to start the game on an eight point run.

Junior forward Nadege Pluviose was a thrill to watch in the first quarter. She dominated the paint as she pulled down five offensive rebounds. However, in the blink of an eye, The Mount started an early comeback. Robert Morris turned the ball over four times of their own. MSM’s defense helped them end the first quarter on a 13-4 run. At the end of the first quarter, the score was 13-12 in favor of The Mount.

The Robert Morris offense came back to life during the break between the first and second quarter.

“They were doing some things that were bothering us a little bit and we had to make some adjustments for how we were going to attack them,” said Coach Buscaglia.

The Colonials went on a 12-0 run in the first five minutes of the second quarter. The first basket from a Mount St. Mary’s player was a three pointer by Juliette Lawless. At that point, the score was 24-16 on the side of the Colonials. Sophomore guard Honoka Ikematsu helped the Colonials offense with two three-pointers that proved to be big momentum changers in the game. By the half, the Colonials had scored 18 more points in the quarter. Mount St. Mary’s could only manage to counter with eight points. At the half, Robert Morris led 30-21.

RMU rode the momentum to start the second half. The scoring was going back and forth for the first time all game. MSM closed the gap thanks to a quick seven to two run. The Colonials comfortable 45-29 lead, quickly narrowed to a 47-36 lead. Perhaps more important, the Colonials had five players in range for double-digit points. Nia Adams and Honoka Ikematsu lead RMU with eight points at the end of the third quarter. Again the Mountaineers trailed the Colonials 47-36 heading into the fourth and final quarter.

The Colonials were once again without sophomore guard Megan Callahan in the line-up. Callahan is expect to miss the rest of the season with an injury.

When asked how her absence is going to effect the team, Coach Buscaglia had this to say.

“It’s going to expose if we are ready if we are ready to come up and step up,” explained Buscaglia, “Continue to go with hands wide open and a full heart. That’s what I always say. When someone goes down the next need to step up.”