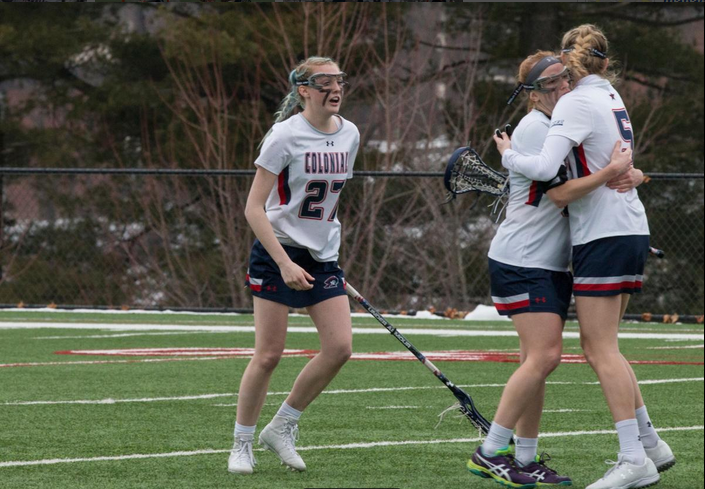 The Robert Morris Colonials (7-8, 3-2 NEC) women’s lacrosse team clinched a berth in the NEC Tournament for the fifth consecutive season with a 21-5 win over the Sacred Heart Pioneers (2-12, 2-3 NEC) Friday afternoon at Joe Walton Stadium.

Both teams traded possession of the ball early in the first half, but it was the Pioneers who got on the board first. At the 2:02 mark, Hannah Wise put a shot past RMU goaltender Katelyn Miller to give Sacred Heart the 1-0 lead.

However, it took RMU only 40 seconds to respond, as midfielder Melanie Gandy scored her 18th of the season from the deep slot, with the assist going to No. 24 Shannon Lynch. That goal left 27:40 on the clock,

RMU then struck again when senior attacker Nikki Gillron scored her seventh of the season, assisted by Sophia Eureka. The Colonials then went on a five-goal streak, with tallies coming from Cio Kerr, Kerri Sayrafe, and Lynch, with the latter pair scoring twice in the span.

With the offensive outburst, RMU was now up 7-1. The Pioneers would not go away though, and finally got their second goal of the game when Alyssa Pearce put one past Miller with 13:57 left on the clock in the half.

Sacred Heart then got their third when Wise got her second of the game assisted Averi Farhat. RMU had some good chances immediately afterward, including a nice chance for Sayrafe off a pass from Dana Davis, but were unable to capitalize.

Another bright spot for the Colonials was their resilience on defense, limiting Sacred Heart’s shot opportunities and taking turnovers off the Pioneers’ hesitancy at shooting the ball.

RMU then got back in the driver’s seat with three goals in the later stage of the first half, with Davis, Lynch, and Kerr all finding the back of the net for Robert Morris, including Kerr getting her second of the contest and Lynch netting the hat trick. Despite the Pioneers playing much more aggressively in the later part of the half, RMU ended the first half firmly in control, up 10-3.

In the second half, the Pioneers got off to quick possession of the ball and were able to work it around the perimeter, but once again the Colonials’ staunch defense and speed on transition offense stymied any decent SHU scoring opportunities. Madison Griffin had an opportunity to extend the RMU lead on a free position shot but was unable to convert.

The Pioneers then made it 10-4 when Pearce got her second goal assisted by Blair Yesko. From there, RMU seized control and never looked back.

The Colonials scored nine straight goals, the most notable being Grillon’s third goal of the game, giving the senior her first career hat trick and were up 19-10 in the late stages of regulation.

Averi Farhat gave the Pioneers one more goal with 2:52 left in the game, but sisters Mackenzie and Melanie Gandy would be the last to add their names to the scoresheet in the game at the 0:01 mark and 1:33 mark respectively and sealed an RMU victory 21-5, moving the Colonials to 8-8 overall and 4-2 in the Northeast Conference.

“It’s amazing … we’ve clinched our NEC spot … this is my fourth time going. It was really a huge team effort today,” said Grillon.

Grillon continued to say, “It was passing, it was catching, it was transition all together. It made it amazing and this team is extremely special.”

The senior attacker also held high praise for the defense saying, “Our zone is absolutely amazing, we’re always making adjustments to fix what we have … and we just keep working every day. Defense kicks our butts in practice all the time so we’re making them better and they’re making us better.”

Grillon also talked about facing the challenge of being on the road for the NEC Tournament this year and what her team needs to do to stay focused and win games.

“We have to play our game. When we play who we are, we play amazing and we can beat anybody … It showed when we beat Louisville. We just can’t play down to the opponent or get ourselves psyched out.”

Davis echoed that the win for RMU was based on a team effort. “Our defense was a solid unit (as well as our offense), and everything we had started from defense and worked our way up, and it also started on the draw. We controlled the draw for the majority of the game, and this was essential to us winning.” Davis also agreed that the team needs to play “their game” and they have to “control what we can control and not letting any of the uncontrollables get to us, and just focus on what we can do.”

With the win, Robert Morris clinches a playoff berth for the fifth straight season. RMU has one more game before they travel to Smithfield, Rhode Island, for the 2018 NEC Women’s Lacrosse Tournament, which is being hosted by the Bryant Bulldogs (who are also regular season champions). The Bulldogs defeated co-high seed Wagner Friday by a score of 11-10. The Colonials will be back in action on Sunday at noon when they host LIU Brooklyn (3-12, 0-6 NEC).