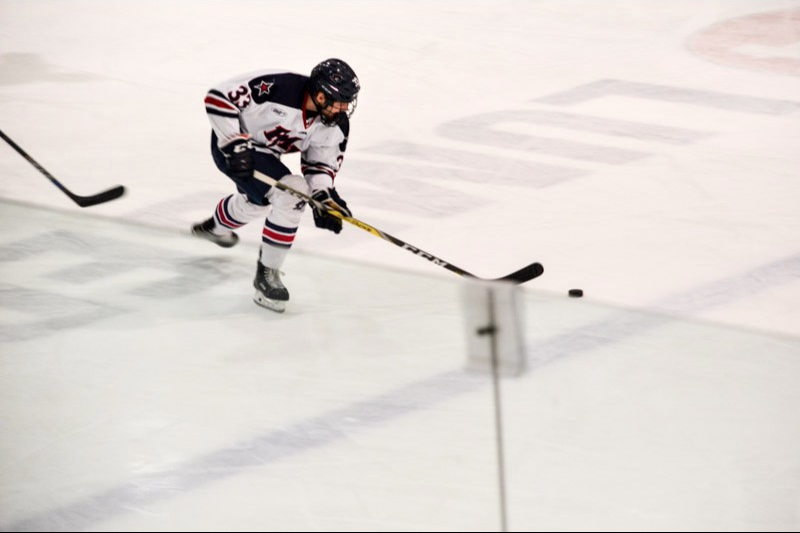 The second senior night on ice would be men’s hockey against Mercyhurst. The game would end in a poetic fashion with senior and assistant captain Ben Robillard scoring the game-winning goal in a 3-2 Colonials victory.

Robillard was close to tears during the post-game interview but didn’t hesitate to congratulate his fellow seniors. “I room with two of them, and they have been a big part of my life,” said Robillard. “They have been with me through the ups and downs. They are big assets to this team.”

Senior night started with the Colonials on fire. They peppered Mercyhurst goaltender Brandon Wildung with shots early in the period, smothering the Mercyhurst defense. RMU had three power plays in the period and only took one penalty.

Daniel Leavens received the puck back door and met the toe of Wildung as he stretched across the crease. Fantastic saves in the first period by Wildung kept the Lakers in the game.

A goal by Jack Riley on the power play, at 14:37 in the first, put Mercyhurst up by one. Kyle Horsman was not letting Mercyhurst get off easy as he finished every check he engaged in.

The period would end 1-0 in favor of Mercyhurst.

In the second, Robert Morris was looking to get on the board. It continued its assault on Wildung, but he continued to stand strong.

Six minutes into the period, RMU forward Daniel Mantenuto finally beat Wildung for its first goal of the game and Mantenuto’s second of the season. Assists on the goal came from Timmy Moore and Luke Lynch. The Lakers put up one more goal on Dalton Izyk before the end of the game, sneaking it five-hole on the senior.

The third period ended 2-1 in favor of Mercyhurst.

An exhilarating third period was in store for the fans, and big hits were the staple of it.

Captain Rob Mann was stellar for the Colonials, as he drove the Lakers into the boards every chance he got.

On the power play, Moore got the puck between the hash marks with plenty of time. He picked his spot and fired a shot just under Wildung’s glove, scoring the equalizer.

With minutes to go, Izyk was run into by Leavens and one other player. Leavens was extremely slow to get up, though he eventually found his way to his feet and was escorted to the bench where the athletic trainer took over.

Leavens returned to the ice a few minutes later.

Because 60 minutes was not enough excitement, the game went to overtime for one more magic moment.

Early in OT, a 2-on-0 break for Mercyhurst ended in a spectacular sprawling save by Izyk.

“He (Izyk) doesn’t make that save, we wouldn’t be talking about Robillard right now,” said head coach Derek Schooley.

That opened the door for the one senior maybe most left under the radar on this Colonials team to shine.

Two minutes in, Robillard took a shot on Wildung. The net-minder got most of the puck, but it trickled in through the five-hole to give RMU the 3-2 victory. The game-winning goal would go under review, but it was ruled good.

Robillard capped off a thrilling senior night performance by RMU with the game winner.

“The feeling was indescribable…” said Robillard, fighting back the tears. “I was thinking in the intermission, ‘What if I got the goal?’ When it went in, it was an amazing feeling.”

A stellar performance by the seniors, as they came out on top over Mercyhurst. The women won earlier today, making it a clean sweep on senior night for the Colonials.

“Hats off to our seniors, I can’t say enough good things about them.” Schooley said.

Robert Morris will play Niagra next weekend in New York on Saturday, then at Heinz Field for the outdoor game on Sunday, Feb. 26.