Rough first half leads to Delaware victory of RMU 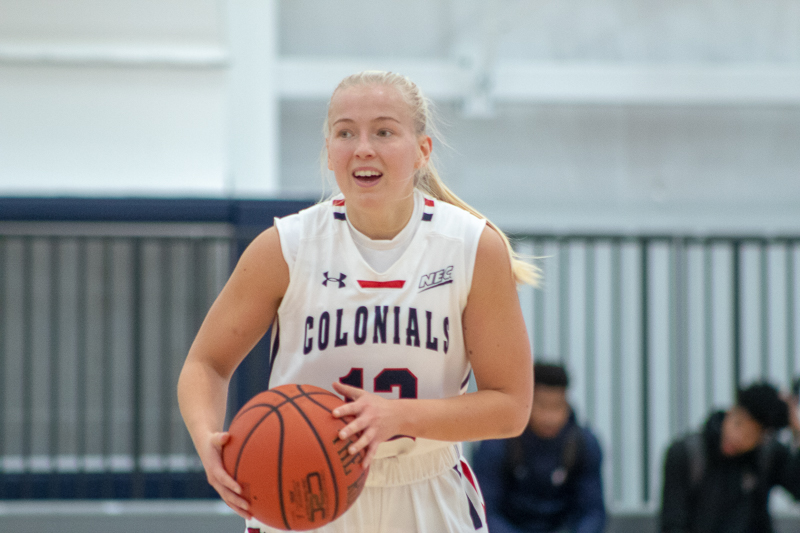 Nina Augustin holds the ball on the court against the La Salle Explorers.

MOON TOWNSHIP– The Robert Morris women’s basketball team (4-4) failed to sweep their three-game home-stand after losing to the Delaware Blue Hens (3-5) 73-62. This was the Colonials’ final home game for over a month, as they begin a five-game road trip next week.

The troubles started early for the Colonials, as they came out flat in the first half. The offense stalled early, shooting 8-27 from the field in the first half, including going 1-12 from three-point range as they were forced to the outside often by the Delaware defense. Coach Buscaglia, however, pointed at their defensive play as the team’s biggest struggle today, “We were definitely not ready out of the gate to play defensively. Our defense is our backbone, and a lot of our offense comes from our defense. While our offense wasn’t [clicking], on a normal day for us defensively we would have been right in [the game].”

The Blue Hens were consistent in their shooting, as they went 16-28 in the first half. Their biggest strength came from their work in the mid-range and beyond the arc, as they finished the game shooting 6-13 from three. Forward Nina Augustin, who finished the game with 10 points and four assists, said of their three-point defense, “We [have to] know their shooters… we have to know their personnel better and if their non-shooters shoot threes during the game, we have to adjust.”

Coach B added that “The way we were playing defense early on in the game, I definitely think we could have made things more difficult, I think Delaware got very confident and comfortable in their offense and really controlled the tempo.”

Delaware took a 44-26 lead into halftime, where the Colonials attempted a second half push led by Augustin, Esther Castedo and Dahomée Forgues. Castedo had 11 points and went 2-2 from long range, while Forgues lead the team with 14 points in a career-high 29 minutes of action. Largely missing on the scoreboard, was star center Nneka Ezeigbo, who had her worst game of the season so far, finishing with a season-low seven points, three turnovers and she went 5-10 from the free throw line.

Coach B had strong words for Ezeigbo’s performance, “Nneka did not come ready to play today…after such a successful week that she had before, she has to be ready to come back to work. We’re going to make sure that we continue to teach her and continue to help her grow, for her to put her best foot forward and respond.” Also judged for her poor performance, was starting forward Isabella Posset, who was benched after only nine minutes of scoreless action after making three turnovers.

Despite the push, Delaware responded well in the fourth quarter and held on to their lead to win 73-62. Guard Abby Gonzales lead the Blue Hens with 16 points and forward Samone DeFreese also had a big game with 15 points. Forgues said of the team’s performance today that “We started really slow, the transition defense wasn’t good, and our rebounding throughout the whole game was not good. We got outworked.”

Coach B said that the Colonials needed to get better on responding from a long break for the next game, “We’ve struggled with [coming out of] the break here of defensively doing our job. With [the break] you’d think it would result in a great defensive tilt, but what has happened to us is that our defense wasn’t good against Kent State… and again today.”

The Colonials will have the opportunity to respond after a long break and to get back in the win column when they face Rhode Island (6-2) next Sunday.