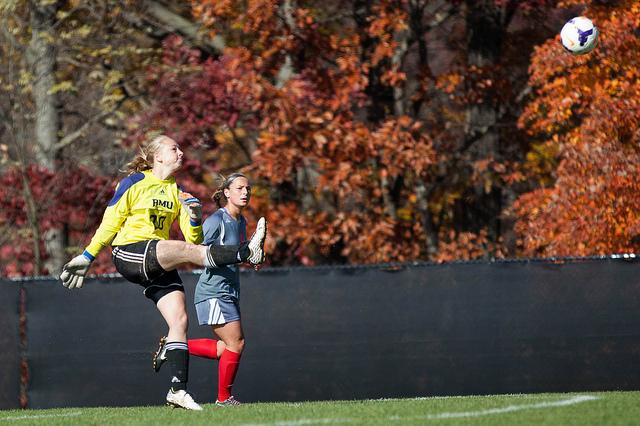 After surrendering a late goal that ultimately proved to be the game-winner Friday at Bucknell, Becky Schoenecker vowed not to do the same in Robert Morris’ following match against St. Bonaventure.

With four minutes remaining in double overtime, the Bonnies’ Lauren Hill had a one-on-one opportunity with the senior goalkeeper, but Schoenecker stood tall in net, kicking the ball out of play with her right foot, ultimately preserving a 0-0 tie Sunday afternoon at the North Athletic Complex.

“The other game against Bucknell, they scored with about five minutes left in the game and for our team to work so hard and then have that last chance go in, I just didn’t want that to happen again,” she said.

St. Bonaventure controlled the game’s tempo right out of the gate, firing six shots during the match’s first 15 minutes. From that point forward the Colonials had the upper hand, though they were unable to find the back of the net.

Robert Morris managed to have a few solid scoring opportunities before the half, but St. Bonaventure keeper Christina Sarokon turned away shots from Gabrielle Corrente and sophomore Antonia Grese to close out the first 45 minutes of play.

After a scoreless second half, the game went into overtime.

Madison Kozlowski had RMU’s best scoring opportunity in the 96th minute after the forward rifled a shot wide of the net.

“We’re creating the chances, we just have to put the ball in the back of the net,” said Kozlowski, a junior. “We have a little bit of a different attitude, consistently working hard, doing our best every second we’re out here.”

The contest then went into a second extra frame, setting up Schoenecker’s heroics.

“We played our hearts out for over 90 minutes and I wanted to make sure we had something to come from it,” the Cheswick, PA native said. “I just got lucky, she put it within reach of my foot and I was able to get a touch off of it.”