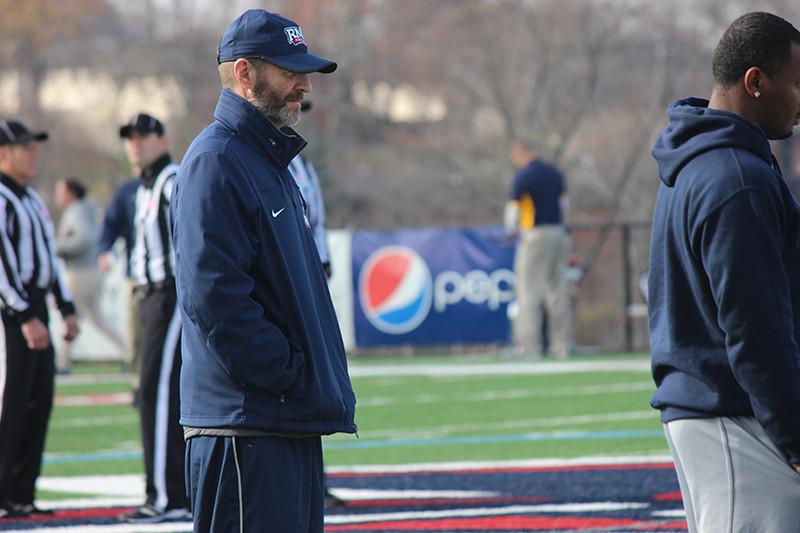 Darrin Hicks in pregame warmups before RMU's match-up with ETSU

Robert Morris University’s Darrin Hicks achieves this all before the team even wakes. He starts with 4 a.m. yoga, steady breathing, and prayers. Each Sacred ritual ascends his passion and leadership abilities, and fuses his mind into a focused being.

Growing up in the relatively small town of Weirton, W.Va.; being taught humility, respect and discipline; and having a reasonably pleasant childhood does not sound boring to most people. Perhaps uneventful, but definitely not boring.

In some ways, everyone strives for a state of peace, which by definition brings solitude, or, in turn, uneventfulness.

Maybe it’s a cultural thing. It may simply be a change in the way society defines being boring or exciting. It may now be a world in which excitement is demarcated by reality shows and Hollywood.

But, in Hicks’ case, he is perfectly fine being boring.

Funny thing, though; he is anything but.

If the daily yoga doesn’t sound uncommon, how about his Warrior and Paleo-esque diets, or the fact that he topped out at 298 pounds in his college playing days on the offensive line and now sits at a cool 170? Any one of those sound like the ‘Average Joe’ thing to do?

Let’s start with the yoga. (For the record, “yoga” was his response describing something no one knew about him.)

It all started four years ago. And no, it’s not the point when he lost his offensive lineman weight.

“It started with trying to learn the poses, and I did some classes,” Hicks said as he leaned back in his adjustable black leather chair in his office. “They say the more you get into it, the more the yoga flows through you, and your body will tell you what you need.”

This routine may just be the key ingredient in staying level headed in this world, especially when the occupation is as demanding as a football coach.

See, yoga is like enabling reverse psychology on the brain, according to Psychology Today’s Alex Korb, Ph.D. While Hicks is holding a headstand or warrior one pose, his brain is stressed out due to the strain and difficulty of the poses. But, here is the key part: he remains calm, relaxed, and keeps breathing.

This is essentially training the brain not to cry “Wolf!”

So, when faced with a stressful situation in his everyday life, Hicks is able to avoid invoking the stress response in his mind.

It may seem strange to think someone in Hicks’ position could be so devoted to something that promotes peace, calmness, and tranquility, and it is a fair query to have.

How could a football coach, especially of a Division I college program, have such a mellow personality and style?

Well, it did not start out that way.

Hicks got his first coaching job one year removed from his graduation from Washington & Jefferson College in 1996. He coached the quarterbacks and wide receivers starting in 1997 at Emporia State University, resulting in single-season school records for points and total offense; just how far did they go?

At only 21 years old, a young Hicks was thrust into a role he had envisioned himself being in long before then: coaching. The obvious obstacle he immediately faced was commanding respect from men only slightly younger than he was.

How he handled this, at least at first, probably would not be looked highly upon by a yogi or yogini.

“When I first started, I was probably more of a yeller. I was louder,” Hicks said. “My first boss wanted (the coaches) to be hard on them. He wanted us to constantly be on the players.”

He quickly learned, however, that yelling constantly was only marginally successful and, more importantly, was not appropriate for him. Hicks hopes he has developed, coaching wise, into more of a motivator than anything else.

“Those guys responded at that time. I don’t know if that style necessarily works any longer. I don’t think it does, really. I would hope that I would be a motivator, and I try to use different tactics. It wouldn’t be your standard every day, ‘Here’s a quote’ type of thing.”

The way in which Hicks now motivates his players at Robert Morris dates back to approximately four years ago, and it has nothing to do with yoga.

Actually, it has everything to do with yoga, but the yoga was a direct result of a community that changed Hicks for good.

SEALFIT – a program designed by former Navy Seal commander Mark Divine – outlines how “Desire, Belief, Attitude, Discipline and Determination work together to super-charge performance, and how knowing what your ‘why’ is will provide a foundation for developing your non-quitting spirit,” via an email from the program’s website.

The military background and ideologies fit perfectly with Hicks, being that he is a large supporter of everything the U.S. military stands for and accomplishes on a day-to-day basis.

Hicks fully invested in Divine and became a member of the online community for the program, along with adopting the messages, methods, and training from it.

“(Mark Divine) draws from martial arts, he draws from the Navy Seals, the yoga traditions,” Hicks said very earnestly. “There’s about 1,500 people in this community. It’s about healthy living; it’s about positivity, creating a life that you want to live.”

Right from SEALFIT’s inception in 2011, Hicks put “both feet in,” purchasing and completing the Foundational Course in the first 12 months. Since then, he has progressed to the Advanced practices, which “are a lifetime practice” with no stopping point.

The combination of physical and mental training helped Hicks really understand himself, develop a routine, and realize how to get the most out of the players he coached.

“(I’ve been) trying to use leadership, and trying to use those principles that I’ve learned over that time within this academy to try to motivate young people to greater heights,” he said.

He uses the statistics from each coach to create an advantage for the entire Colonials team.

“I learned a long time ago that you give all the coaches ‘areas of expertise,’” Hicks said. “So each one of the coaches has an area that they are ‘responsible’ for.”

Like generals on the battlefield, Hicks looks to the coaches’ reports for guidance.

Essentially, the coaching staff serves as an assembly line of statistical data, each coach working on one specific aspect of the game (their ‘area of expertise’), such as blitz tendencies or third down conversion rates.

This process is surprisingly efficient, with a new scouting report worked on Sunday and distributed Monday every week. Hicks believes this system has really profited the team.

“You create a group of experts in their particular (part of the game plan), and I think it has really helped us,” he said.

Although he has created a nice system in which coaches thrive and bask in statistical knowledge, sometimes there are players that change the way a coach coaches.

In Hicks’ case, two players helped him think outside of the box in terms of personnel and play calling, changing his “philosophy on the game.” While at Delta State University, Hicks encountered these two players that did not fit his scheme.

One was a bruising fullback, something Hicks’ run-and-gun offense did not have a glaring need for. But one day, the player came into Hicks’ office and told him he did not need the ball during the game. He just wanted to block.

This fullback made it to the final roster cuts in 2009 with the Jacksonville Jaguars.

The other was an I-formation running back that, again, did not go with Hicks’ style of offense.

This running back led Delta St. in almost every offensive category and is currently playing in the German Football League. He won two German league titles, and some consider him one of the best running backs in the history of that league.

Both of these players exceeded Hicks’ expectations and limitations he had of them, which he says will never happen again.

“I never, from that point on, put a limiting belief on any player and said, ‘Well this kid doesn’t really fit;’ or, ‘This guy’s not going to be right for what we want to do.’”

It is moments like these that Hicks falls back on when explaining his habits and routines and rituals. According to him, every person has something still to gain.

“I try to learn as much as I can from everyone. Everybody that you come in contact with knows something that you don’t know, so I think you can learn from everybody.”

Balancing family, work, and self is tough. Exhausting at times. Some cannot handle the pressure, ultimately resulting in defeat.

He turns to his spiritual senses, things that all came together four years ago when he found Divine. To him, the way of the soldier, warrior, and leader is the only way to live.