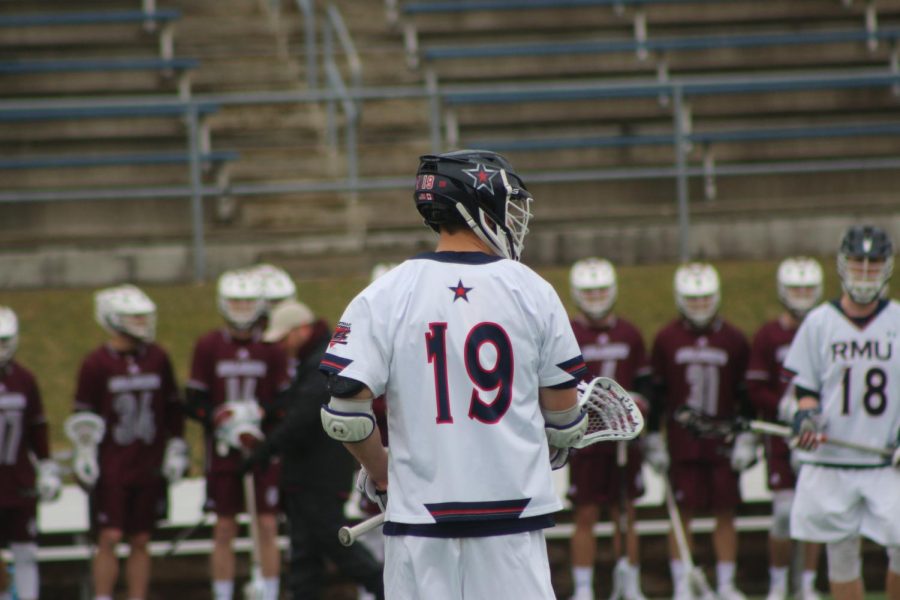 MOON TOWNSHIP -- Midfielder Tyson Gibson waits on the field during a game against Bellarmine on Feb. 23, 2019 (Avin Patel/RMU Sentry Media). Gibson is one of two Colonials that were drafted into Major League Lacrosse.

Heger was selected in the seventh round as the 59th overall pick in the 2019 Major League Lacrosse draft. Heger becomes the second consecutive RMU player to be drafted by the Machine. The Machine selected RMU alumnus Zachary Bryant in the 2018 draft.

Through five games of the 2019 season, Heger has played for 280 minutes with 72 goals allowed. Heger has allowed an average of 15.38 goals per game, but he has also saved 56 shots for a save average of .438 thus far in the season.

The Ohio Machine will be starting their 2019 season on June 4 in Boston to take on the Boston Cannons. Last season, the Machine finished 3-11 and finished last in the standings.

As for Gibson, he was selected in the fifth round as the 41st overall pick in the draft. In the 2019 season so far, Gibson has started all five games so far and has scored 10 goals with six assists for a total of 16 points. Gibson has made 37 shots for a .270 shot percentage with 17 shots-on-goal, which is good for a .459 shot-on-goal percentage.

The Atlanta Blaze starts their season May 31 in Florida to play the Florida Launch. The Blaze finished last season 7-7, which was good for sixth in Major League Lacrosse.