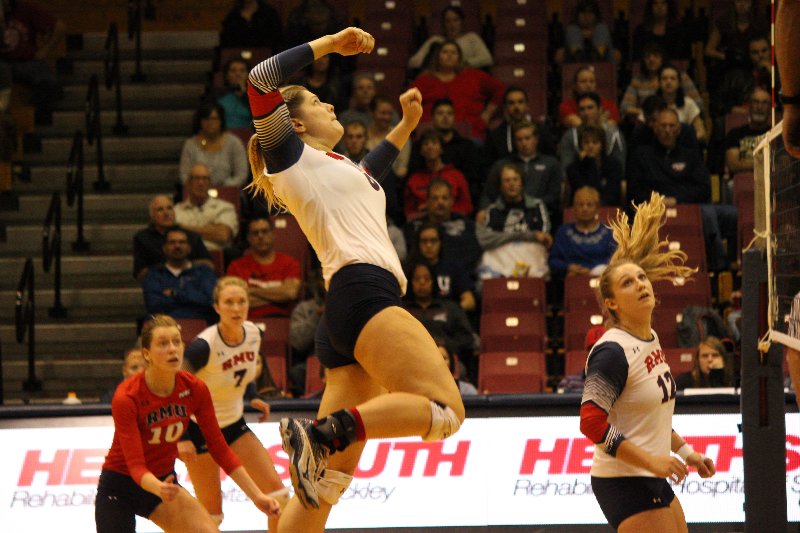 Senior day for Robert Morris, the conclusion to parents weekend, pitted the RMU women’s volleyball team against the Sacred Heart Pioneers on Oct. 30.

Leah Dunnivan, Arden Fisher and April Krivoniak played their last game at the Charles L. Sewall Center for Robert Morris, and it was heartbreaking for them as well as the fans.

RMU has watched one of the best volleyball players to ever come through the program in Fisher. Dunnivan is in the top five all-time for individual blocks at Robert Morris. Tallying 632 kills on 306 sets at RMU, Krivoniak will also be missed alongside her other seniors.

Although, Fisher, Dunnivan and Krivoniak all leaving does not mean the Colonials are not going to be competitive next year.

This game alone, sophomores Brianna Schmid and Taylor Lord combined for 26 kills, six blocks and an ace by Lord. Schmid was very impressive, while Lord is second on the team in kills behind Fisher.

The Colonials came out surprisingly flat in the first set after coming off of a 3-0 victory against Fairleigh Dickinson. They immediately went down 5-0 in the set, and head coach Dale Starr called a time out to get the team together. RMU was down by five, give or take a few points, for the set until the score was 23-17.

In the second set, the Colonials got the first two points then gave up five consecutive points. The set stayed close for the remainder of the set with Sacred Heart ultimately coming out on top, 25-22 — leading the match two sets to none.

Robert Morris wasn’t going down without a fight. The team made it 7-1 early on in the third set. Sacred Heart tried to come back but couldn’t conquer the Colonials, who won the set, 25-23.

RMU went into the fourth set with some momentum. Sacred Heart then promptly put up eight points in a run to make it 16-8. The Colonials could not overcome the barrage of the Pioneers offense, despite a good run near the end of the set, ultimately losing by a score of 25-19.

Losing in four sets was a bittersweet ending to Robert Morris’ final home game of the regular season. For Fisher, Dunnivan and Krivoniak, that game was the last regular-season home game that they will ever play at the Sewall Center.

A touching tribute to the seniors at the end of the game occurred, leaving the trio in tears — along with some in attendance.

The last three games of the season are all away. The Colonials’ next game is Nov. 4 in Loretto to face Saint Francis U.