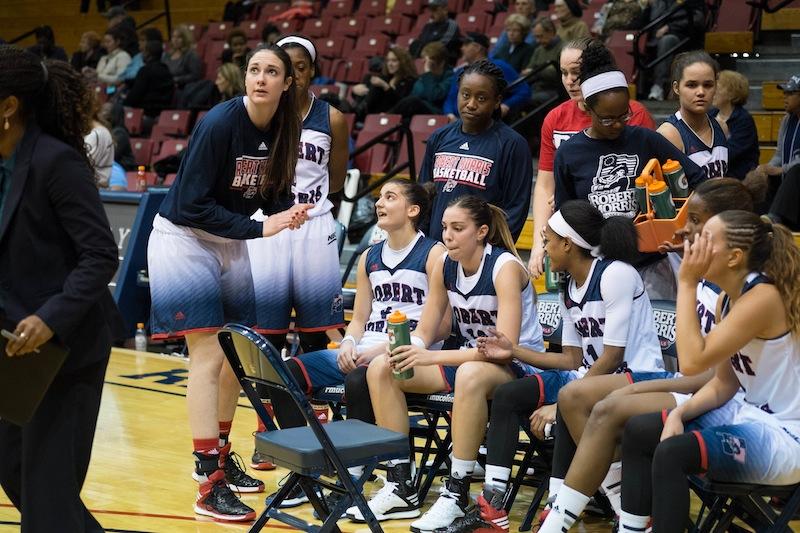 With a 75-61 loss to La Salle in its home opener Wednesday night, the Robert Morris women’s basketball saw a 13-game home winning streak snapped inside the confines of the Charles L. Sewell Center.

The loss drops the Colonials to 6-5 overall in their first home games of the year since the 2004-2005 season, where they’ve been well above average. In that time span, they are now 37-16 in non-conference contests, and an impressive 112-30 overall.

Last year’s squad went 15-4 at home, including a run that ended with a 78-64 victory that earned the Colonials a Northeast Conference title and a berth in the NCAA Tournament.

“I think our players showed a great deal of heart staying in the game, knowing that the game is a 40 minute game. And I was really proud even though we were undermanned,” said head coach Sal Buscaglia. “We’ve played some tough teams in the country, and it’s just unfortunate that we weren’t fully healthy in our home opener.”

A fairly large crowd for a Wednesday night, 486 fans saw the Colonials play in person for the first time this year, and were vocal throughout, despite the outcome. The team responded with an exhausting effort, clearly showing the effect that losing two key starters had on the squad.

The Colonials stuck around in the game, despite allowing the Explorers to shoot 71.4% from three-point territory.

“That’s what you got to do. You can’t give up. We’re a team that’s not going to give up no matter if we’re losing by 30 or 20, as long as the clock is going we just gotta keep playing. They know that, and they just follow me I guess,” Ravelli said.

The home opener served as an opportunity to unveil some of the new faces on the Colonial’s roster this year, including freshmen Jocelynne Jones and Mikalah Mulrain, who combined for 12 rebounds, seven points, two blocks and a steal.

“They have a lot of heart and are very good team players. I learned that they’ll give everything they have,” said Buscaglia. “You gotta lean that, its part of athletics. People get injured and you’ve got to overcome that.”

Though the young team struggled, coaches and players had a hint of optimism as they departed from “The Chuck” as they affectionately call their home arena.

“You can’t give up. Other people need to step up too. That doesn’t mean we’re just not going to play. We just need everyone to step up their game,” said Ravelli.