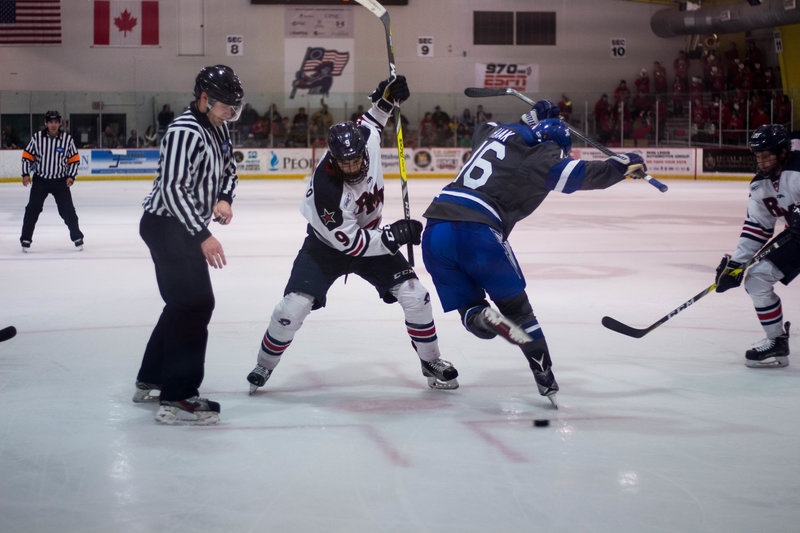 Robert Morris sought to rebound from its 6-2 loss against the first-place Air Force Academy Falcons the night before in this tilt. Fueled by two goals from Alex Tonge, the Colonials did just that, winning by a score of 2-1.

RMU goalie Francis Marotte getting the call once more showed the confidence that head coach Derek Schooley has in the young net-minder. Marotte was out for redemption after he let up three goals before the end of the second period in the previous game.

With two other fantastic, seasoned goaltenders to choose from, Schooley went back to Marotte. “We are lucky to have three solid goaltenders,” said Schooley. Most teams don’t even have two, we have three.”

RMU had a much better start this time, coming out on fire. An early penalty by Air Force sent the Colonials on a power play.

With great net-front traffic, Tonge snagged the puck on the right side of Falcons goaltender Billy Christopoulos. Tonge wasted no time, rocketing the puck into the twine to give Robert Morris the lead, 1-0.

The period was full of penalties and aggression. Luke Lynch found himself in the middle of the disagreements on a few occasions.

Air Force and RMU both took two penalties a piece in the period. All four man advantages were killed, but that didn’t stop Robert Morris from outplaying the Falcons for the entire period.

“We saw the second period yesterday where we played great, we wanted to replicate that,” said captain Rob Mann. “We wanted to get off to a strong start and we did that.”

Air Force came out in the second with more pep than in the first. The Falcons were still struggling to get the puck beyond the stellar defensive lines, though.

Midway through the period, Tonge got the puck once again and delivered it to the back of the net with ease as Christopoulos was sprawling. The Tonge, Daniel Leavens, Brady Ferguson line showed its chemistry in Tonge’s second goal of the evening.

“I tried to simplify my game tonight,” said Tonge. “It didn’t go very well last night. We simplified, got to the net and I found the puck.”

Robert Morris looked to be on top of things until a bad penalty sent Air Force on the powerplay. This time, the penalty kill couldn’t get the job done.

Marotte made the initial save, or so he thought. The puck trickled behind him, the defense cleaned up the garbage and got the puck to the front of Marotte. At this point, Marotte, all four Colonials and one Falcon were in the crease on their stomachs.

The puck made its way to a Falcon, and he got the puck up and over the pile. Thoughts of interference swept through the crowd but not the officials. Halfway through the second period, RMU still led, 2-1.

The second half of the period was spent primarily in the neutral zone and deep in the Air Force zone. The Falcons had some energy after they scored their goal, but the game quickly shifted in favor of the Colonials.

Robert Morris continued to dominate Air Force in its zone for the remainder of the period.

RMU started playing a defensive game in the third period. It did a good job of clogging up the neutral zone and clearing the puck every chance it got.

The Colonials started taking runs into the zone when the Falcons began to get better chances. The Leavens, Ferguson and Tonge line went to work in the offensive zone, getting some quality chances on Christopolous.

“We thought that yesterday was the first time we got outworked,” said Mann. “We wanted to get the puck in deep and win the little battles. I feel that played a big role in the win today.”

Air Force pulled its goaltender with one minute left in the game. Tonge didn’t get the chance to complete the hat trick, but Robert Morris earned the 2-1 win nevertheless — a much better score than the 6-2 loss the night before.

“We wanted to make sure we played with energy; we wanted to compete,” Schooley said on the win. “Our motto today, we took from the Washington Capitals, ‘Shut up and play.’ We did, I thought we played with a tremendous amount of passion.”

With the victory, the Colonials moved to third in the Atlantic Hockey Conference. Robert Morris next travels to play Holy Cross on Jan. 27-28.