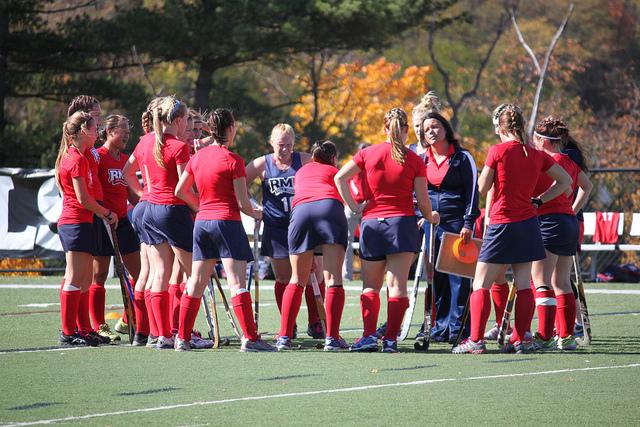 It was a typical Tuesday afternoon near the end of her third semester at Robert Morris when Emma Singer heard the news that would shatter her world.

The sophomore was sitting in class when her cell phone received a text from an unknown number asking her and her teammates to meet with RMU President Gregory Dell’Omo and Craig Coleman, M.D., the Athletic Director.

Even though she had heard rumors that the field hockey team was on the chopping block, Singer didn’t think anything of them because of the program’s performance this season, which included an appearance in the Metro Atlantic Athletic Association’s championship game.

“It doesn’t seem real, it still feels like I’m going to come back next semester and have a spring season. It hasn’t really set in that all of us are leaving,” said Singer. “It’s basically like having half of your life working toward something and then having it taken away.”

Because of the reduction of Division I sports being offered, Singer said that nearly a third of her teammates have begun to look for other options to play elsewhere.

“I’m probably going to stay, purely from an academic standpoint, but I am looking at other options. We’re all pretty much looking. Total, there are eight girls out of 24 who are possibly going to stay, the rest are looking at transferring,” she said. “I redshirted my freshmen year so I still have three years of eligibility so it would be a smart choice to go somewhere else, but it’s just so hard to leave somewhere that you get attached to.”

“It’s hard for other people to realize that we all set out to play field hockey in college, but we chose here for a reason because we wanted to play here. You’re not giving us the option to play here like you told us that we could. What do we do now? We had our team, we had all of this, and now we have to start all over and look somewhere else. We thought we were done with it and we’re not.”

After earning her first career victory October 20 against Sacred Heart, the goalkeeper was optimistic about the 2013-14 season, one in which she was projected to be RMU’s starter. But now, she won’t receive that opportunity.

At least not at RMU.

“It’s frustrating because I only played in three games this season and I never got to touch Joe Walton field. It [my win] means a lot more to me know just because Erin [McKenzie] was so proud of me that game and she was the first person to come up to me,” the Harrisburg native said. “I’m thinking, as we’re running off the field celebrating, ‘this is what next season is going to be like.’”

Despite the fact that, with the loss of the field hockey program, the amount of international students will inevitably decrease, Coleman said that he doesn’t anticipate this affecting the university in the future.

In a statement made December 3, the day it was announced that Robert Morris would decrease the size of its Division I athletic programs, Coleman said that the intention is to increase the gratification other student-athletes have as Colonials.

Because of a survey administered to student-athletes when they graduate assessing their satisfaction with the Robert Morris Athletic Department, Singer can’t comprehend why her team got axed, while others remain.

“What hit home for me is when he [Coleman] said that one of the things that they based it [budget cuts] off of was that they surveyed senior athletes as they were leaving and a lot of them weren’t necessarily the happiest that they could have been,” said Singer. “The other teams that are left deserve to be happy, they deserve to get extra money so they can have nicer places, nicer buses to travel with, but what makes the value of their happiness come before ours? Do you need to make them happier so we get to be miserable and go somewhere else now?”