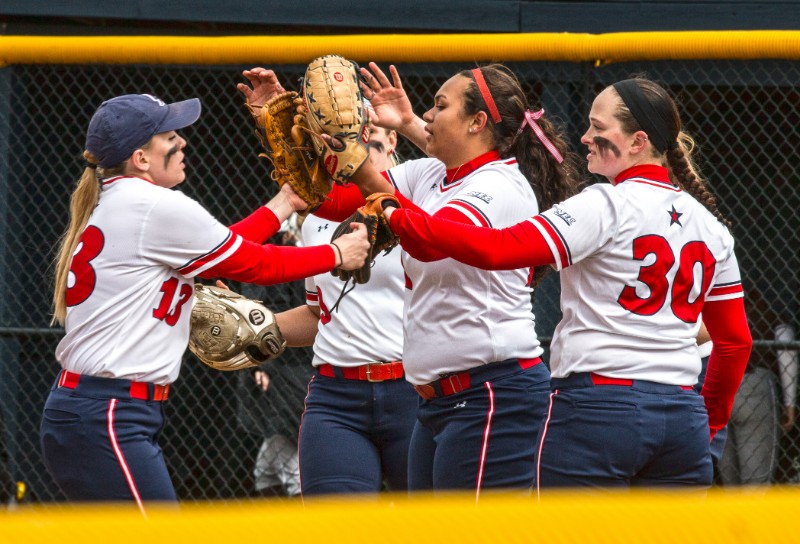 MOON TOWNSHIP, Pa.– On a chilly afternoon, the Robert Morris softball team (14-37, 5-7 NEC) took on the Mount St. Mary’s Mountaineers (25-26, 9-7 NEC) hoping to put an end to a seven-game losing skid. They split the doubleheader, losing 9-1 in five innings in game one, and winning 7-4 in game two. These were Mount St. Mary’s final regular season games.

Laura Coulter got the start in game one for the Colonials and was roughed up in 3.1 innings pitched, allowing six runs (four earned) on seven hits. She was opposed by Amanda Berkley, who only allowed one run in a complete game, pitching five innings. Coulter fell to 2-10, while Berkley improved to 14-13. Each pitcher struck out three in the game.

Coulter pitched two scoreless innings, but it was the third and fourth inning where she ran into trouble. After a Kate Wade line drive eluded center fielder Briana Bunner’s glove for a triple, a scorched double off the wall by Mariah Godde made it 1-0 Mountaineers for the first run of the game.

Coulter limited the damage to one run in the third, but the fourth is where the wheels came off for Colonial pitching. Emilee Kirk doubled to drive in two runs, followed by a Kaylee Stoner single which scored two more and knocked Coulter out of the game with the score 5-0 in favor of the Mount. Dana Vatakis took over, and immediately allowed the sixth run charged to Coulter after an error. This was followed by a Shelby Holcomb RBI single, a run-scoring wild pitch, and an RBI groundout, and the score was 9-0 in favor of the Mountaineers.

The Colonials did show life in the fourth, as a Natalie Higgins double scored Abrielle McCartney, but that was all the Colonials offense could muster that inning.

Vatakis allowed three runs in two-thirds of an inning and was replaced by Madison Riggle, who pitched a scoreless fifth. However, that was it, as the Colonials went down 1-2-3 in the 5th, and the Mountaineers won 9-1 via the run rule, handing RMU their eighth straight loss.

Dana Vatakis, who pitched two-thirds of an inning in game two, was handed the ball to start game two, hoping for a quick turnaround. It was what the Colonials were looking for as she pitched a complete game, allowing four runs (two earned) on 118 pitches. Berkley remained on the mound for the second game but only lasted an inning, allowing one run.

Vatakis struggled in the opening inning, allowing two runs after a Mariah Godde RBI single, and a Kristyna Mala error led to another run, to make it 2-0 Mountaineers after 1, and it was looking like it had the potential to be another high-scoring game for the Mount.

However, Abrielle McCartney made sure that the Colonials didn’t go quietly. Leading off in the first for the Colonials, she blasted a 2-0 pitch to dead center for her fifth homer of the season.

Berkley got through the first, but that was all as she was replaced by Katie Olson for the second inning. The pitchers traded zeroes for the next couple of innings.

The Colonials broke through in the fifth. Taylor Bartlow ripped a single to left to tie the game up, followed by an Erika Bell RBI single to give the Colonials the lead. A Madison Shiderly sacrifice fly and a Mala RBI double made the game 5-2. A single knocked Olson out of the game, who was replaced by Avery Neuhart.

The crucial blow, however, was yet another hit by Abrielle McCartney. She singled and drove in two runs after an error by Kaia Bonshock allowed her to advance to second.

Vatakis flourished on the mound until the top of the sixth, where the Mountaineers proved they would not go down without a fight. Kate Wade hit an RBI groundout, and with the bases loaded, Vatakis hit Lindsay Heinze with a pitch to make the score 7-4. Vatakis weaved out of trouble after that, getting Holcomb to strike out to end the inning.

She loaded the bases again with two outs in the top of the seventh but got Mariah Godde to pop out to end the game and the losing streak. The Colonials won 7-4, as Vatakis got the win and Olson was credited with the loss.

The Colonials will be back in action next weekend for a doubleheader at home against Sacred Heart.