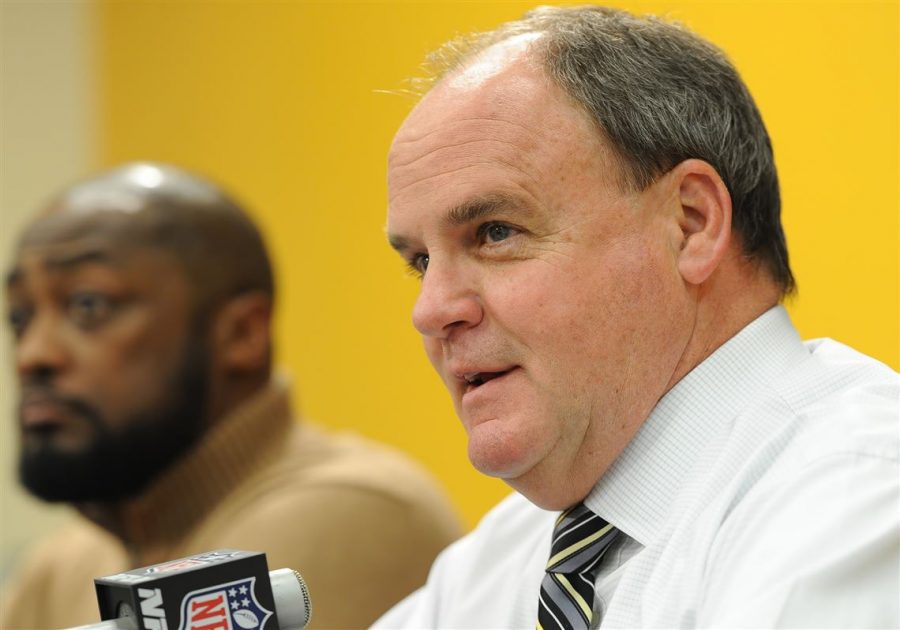 Kevin Colbert stepped from his position on the RMU Board of Trustees due to the recent hockey news. Photo Credit: Pittsburgh Post-Gazette

UPDATE 4:49 P.M.: Per Tim Benz of Tribune-Review Sports, Colbert has stepped down, confirmed by Robert Morris PR. They responded with “We are certainly grateful for the time he served on the board and the substantial support he has given the university over the years.”

Last Wednesday, Robert Morris University revealed that the university would no longer field its Division I hockey programs. Following the shocking announcement, Kevin Colbert, general manager of the Pittsburgh Steelers, has stepped down from the RMU Board of Trustees.

Colbert, a Pittsburgh native, attended Robert Morris University where he obtained a degree in sports management. Following his graduation in 1979, he worked as a graduate assistant coach on the university’s basketball team. In 1981, Colbert was hired as backfield coach and recruiting coordinator at Ohio Wesleyan University.

He also served as the school’s head baseball coach in 1984. Colbert then worked as a college scout for the Miami Dolphins from 1985-1989. He was then hired as the Pro Scouting Director for the Detroit Lions in 1990, where he was responsible for scouting players at the pro level. Colbert joined the Pittsburgh Steelers in 2000 as the Director of Football Operations. In 2010, he was named as the first-ever general manager of the team. He was also placed in charge of player transactions and acquisition.

Colbert was named to the university’s Board of Trustees in 2011. According to the RMU website, the board consists of “trusted community and business leaders, including many prominent alumni, who agree to serve voluntarily in three-year terms.” The board meets regularly to oversee the university’s affairs and to govern its strategic direction.