Stephens’ milestone performance is a symbol of RMU’s offensive revival 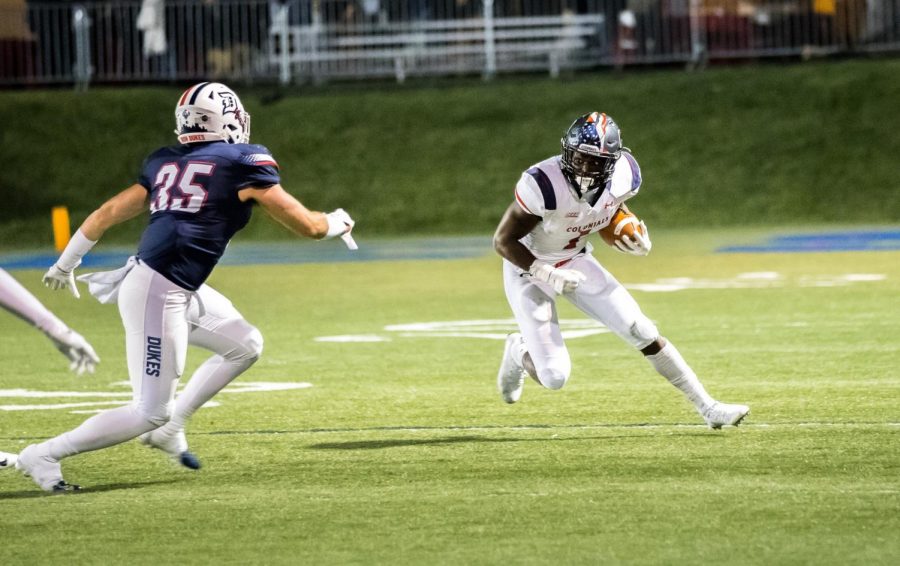 This past weekend, RMU football running back Terence Stephens made history. Stephens became the first player since the legendary Tim Hall to record a game with over 100 receiving and rushing yards. Hall accomplished this feat in the very first season of RMU football.

But if you ask Stephens, the soft-spoken junior transfer is just thankful to god for the chance and his teammates and coaches for allowing him to be successful.

“I just want to thank the man up high because without God this wouldn’t be possible,” said Stephens. “And my teammates and my coaches, you know my coaches they are great coaches, they put you in the right position to make plays.”

Just to provide some perspective on just how momentous this accomplishment is, Tim Hall, who was drafted by the Oakland Raiders, completed this feat on Oct. 15, 1994, in the sixth game in the entire history of Robert Morris Football. Since that day, Robert Morris has played 253 games, and in that span, no one had accomplished both 100 rushing and receiving yards in one game.

During those 253 games, Robert Morris had running backs such as Myles Russ, who holds the school’s all-time rushing record, Archie Wannamaker, Sam Dorsett and nine different players that recorded over 1000 career rushing yards, but none of those legendary RMU names were able to accomplish what Stephens completed this past Saturday.

“I like the fact that Terence (Stephens) is finally picking it up. Our running game is getting where it needs to be at with him and AJ(Alijah Jackson). He’s doing a really good job at it and he’s started catching the ball well out of the backfield,” said head coach Bernard Clark.

Stephens has been a yardage machine all season for the Colonials and even in games where freshman sensation Alijah Jackson is seeing the ball more often on the ground, Stephens in making his impact felt both in the air and on the kick return. Through the first seven weeks of the season, Stephens ranks second in the Northeast Conference with an average of 158 all-purpose yards per game.

Stephens ranks as the fifth-best running back in the NEC in terms of rushing yards and that comes while not even recording the majority of rushing attempts on the team.

And despite the team’s struggles this season, one cannot deny the revival of the running game that for the entire John Banaszak era had simply been non-existent. From 2014-2017, Banaszak only managed to coach only eight games with a ball carrier recording over 100 yards rushing. In the first six games of the Bernard Clark era, there have already been three 100-yard rushers.

Not only has Stephens achieved a major accomplishment, but he has also been an integral part of the revival of the Robert Morris offense which for the past five years had been the symbol of inconsistency and futility in the entire nation.