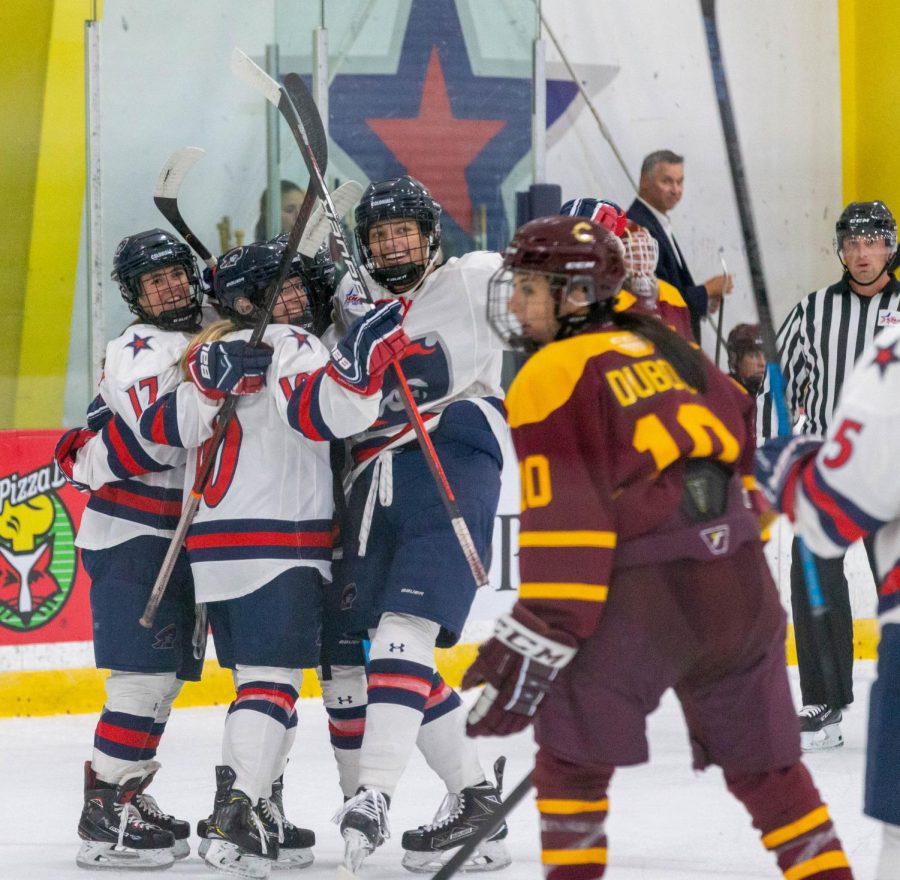 PITTSBURGH– On Friday, the Robert Morris women’s hockey team (9-6-2, 4-1) hosted CHA rivals Mercyhurst (10-4-1, 5-0) on what was the Colonials’ “Teddy Bear Toss” night. Unfortunately for the Colonials, the third period was not “beary” sweet to them, as the Lakers scored four goals and beat the Colonials by a score of 5-2.

Early in the first, Kennedy Blair was called upon for the Lakers, making a blocker save on a partial breakaway by Maggy Burbidge, and then a few moments later, seeking a shot by Natalie Marcuzzi right into her glove.

However, it was Michaela Boyle who scored her 13th of the year to start the plush onslaught. On the nation’s fourth-ranked power play, the puck squirted down to Lexi Templeman, who slid it in front of the net and was poked home in front of the cage. With a secondary assist on the goal, Jaycee Gebhard has her 103rd career assist, which passed Brittany Howard (‘18) for most in Colonials history.

Following the game, head coach Paul Colontino said of Gebhard, “It’s an incredible achievement for her. We’re all happy for her and we’re all proud of her; she works so hard, day in and day out”.

At the end of the first period of play, the Colonials led the Lakers 1-0, and Robert Morris outshot the foes from up I-79, 13-7. The lone goal was scored by Michaela Boyle, her team-leading 13th on the season, with the assists going to Lexi Templeman (her 18th) and Jaycee Gebhard (her 22nd). The Colonials’ powerplay was one of two on the night, and their penalty kill killed their lone man-down situation of the night.

Midway through the second, Mercyhurst tied it up as Michele Robillard came down on a two-on-one with sophomore Sarah Nelles, and Nelles was able to beat Arielle DeSmet up high to tie the game at one goal apiece.

For the remaining stages of the period, it was a revolving door to the penalty box, but neither team was able to capitalize, resulting in a 1-1 scoreline at the end of two periods of play. The lone Lakers’ goal of the period was assisted by Michele Robillard (her second).

Although it seemed that the Lakers controlled most of the period, the Colonials outshot the Lakers 14-13, bringing Robert Morris to a two-period total of 27 and Mercyhurst to a total of 20.

Robert Morris took three penalties in the period but was able to kill off all three of them.

The third period did not start out as the Colonials wanted it to, as Mercyhurst scored two quick goals to build a 3-1 lead. On a remaining powerplay from the third period, Finnish Olympian Emma Nuutinen beat Arielle DeSmet five-hole on a slapshot. Not even a minute later, senior forward Maggie Knott was wide open in the slot and beat DeSmet with a wrister.

“They came out in the third on a mission,” said Coach Colontino, “You have to give credit where credit is due.”

The Mercyhurst onslaught continued as a shot by junior defender K.K. Thiessen seemingly had eyes, ringing off the pipe and falling in the net behind DeSmet to growing the lead to 4-1 Mercyhurst with over 12 minutes remaining in the third.

The Colonial comeback started with a shorthanded goal by captain Jaycee Gebhard after a breakaway by Lexi Templeman resulted in a scrum in front of the net to cut the lead to 4-2. This was Gebhard’s third shorthanded goal of the year

With just over one minute remaining in the game, and Arielle DeSmet on the bench, Mercyhurst forward Michele Robillard scored the empty-net goal, her second point on the night, to give Mercyhurst a 5-2 lead.

On how the evening played out, Coach Colontino said: “We have to watch video, and work on the little things”. The Colonials and Lakers will rematch tomorrow at the Island Sports Center. Puck drop is at 5:05 p.m.