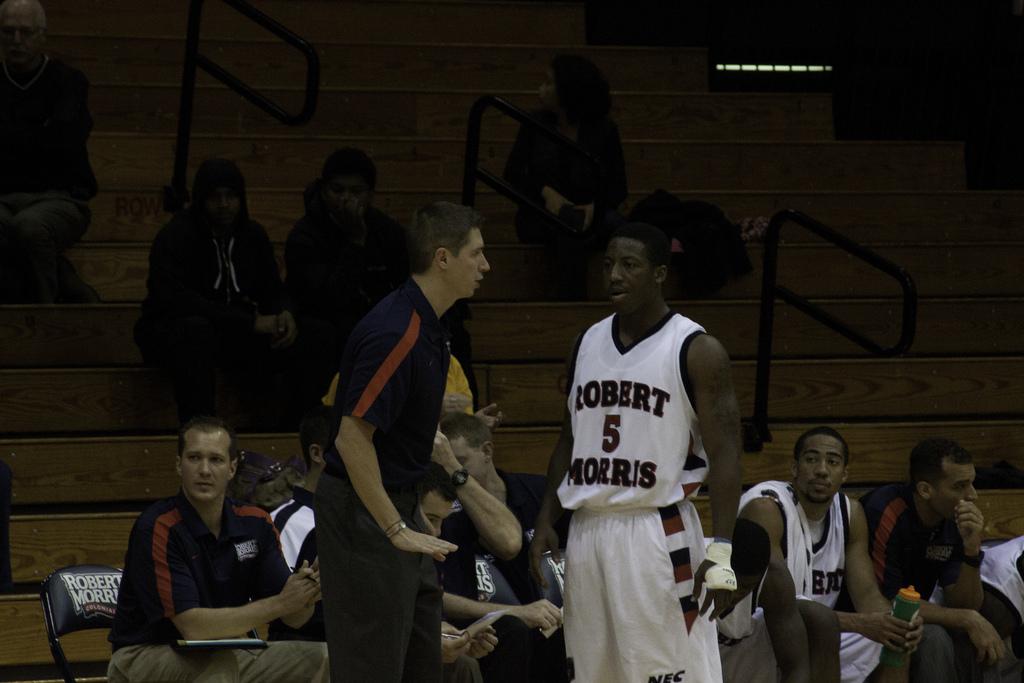 Despite Velton Jones’ 21-point performance, RMU was unable to hold on for the victory and suffered its seventh loss of the season and third in Northeast Conference play.

Robert Morris head coach Andy Toole was disappointed in the way his players responded against the Terriers after handing Long Island its first conference loss in the previous contest.

“Obviously it was a different team than what you saw on Thursday night,” explained the Colonials’ second year skipper, after his club’s thirteen point setback. “It was the same players and same people, but without the focus, without the energy, and without the passion.”

SFC jumped out to an eight-point lead early in the first half until Lucky Jones’s layup knotted the score at 27 with two minutes remaining in the first frame. St. Francis then responded with a three pointer after Ben Mockford’s shot from beyond the arc bounced in.

However on the Terriers ensuing posession, Anthony Myers intercepted a pass at halfcourt and drove the lane for an easy layup, giving the Colonials a one-point lead at halftime.

Robert Morris would climb to a 41-35 advantage at the 15-minute mark of the second half, but SFC battled back and took a 16-point advantage with less than four minutes remaining in regulation.

“When we took the lead, we penetrated, we passed, and we got wide open layups. Then we decided to stop doing that and we stopped scoring,” stated the Colonials’ head coach.

RMU netted 19 tallies in the game’s final seven minutes, but the effort was too little, too late. SFC secured its eighth NEC victory with a 7-10 shooting performance from the foul line in the last 1:38 of the contest.

“St. Francis was obviously terrific, played really hard, really well, stepped up and made shots and deserved to win the game,” continued Toole. “We clearly didn’t.”

The Robert Morris defense struggled against the Terriers allowing SFC to shoot 52% from the floor, and gave up more than 80-points in a game for the second time this year. The Colonials on the other hand made a dismal 22 field goals and shot 20% from beyond the arc.

The Colonials hit the road for a three game swing and then return to the Sewall Center on February 11 for a home stand featuring Saint Francis (PA), Bryant, and Central Connecticut State.