That kind of Knight 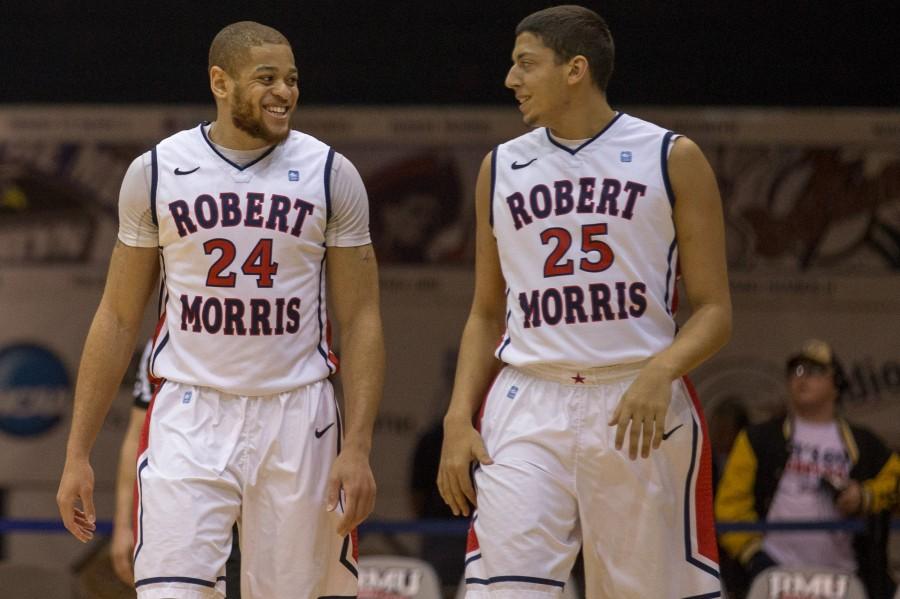 Conrad Stephens (right) received his first playing time in an RMU uniform during the Colonials' 22 point win over FDU.

Taking the court, an anxious Stephens was whistled for a blocking foul almost immediately after checking into the game.

But with a comfy 24 point cushion, the ill-advised infraction meant little for Robert Morris. In fact, if anything, it allowed the Colonials to have one more chance to score before the shot clock was turned off.

And on that ensuing possession, all 718 souls scattered throughout the Charles L. Sewall Center knew exactly who would be taking the home team’s final shot.

“As soon as he went in, all the guys were talking about getting [Stephens] a shot. I was telling them that if the shot clock was off, we weren’t shooting. So I think they were excited that they fouled with 34.6 seconds [left] so that he would get one opportunity to score,” Toole said of the sophomore. “It’s nice to see when those kind of things can happen for somebody to get in and be a part of a Division I game.”

Even though Stephens was unable to knock down his first career shot – a three pointer from the wing – Robert Morris (11-10, 7-2) had one of its signature shooting nights, converting 50 percent from the field, en route to an 87-65 trouncing of Fairleigh Dickinson (7-13, 2-7).

The Colonials jumped out to an early two point advantage moments after losing the tipoff, but a Mustafaa Jones trey from the top of the key put the Knights ahead by one.

Lucky Jones then answered with a three of his own, which catapulted Robert Morris to a 16-5 run midway through the first half, capped off by an Andre Frederick dunk.

Fairleigh Dickinson was able to chip away at RMU’s lead, eventually coming within six with 16:34 remaining.

However from that point forward, the Colonials never looked back, exploding for 46 points in the final frame, ultimately setting up Stephens’ debut in red, white and blue.

“There’s no words that can explain how I felt when he got into the game. It was just awesome because he works so hard in practice,” said Aaron Tate, who netted nine of his 10 points in the first half. “… Conrad is just that type of person that everyone can get along with.”

Despite the fact that Robert Morris is riding a four game winning streak into the homestretch of Northeast Conference play, Pryor said that the Colonials still have a lot of work to do if they want to retain their first place spot in the league standings.

“… We knew we were going to come into conference with the mindset of ‘We got to win every single game,’” said Pryor, who recorded his first double-double with 28 points and 11 rebounds. “To see us picking up wins in a row feels good, but we can’t slack off. We got to keep coming into the gym and putting in work to prepare ourselves for every night.”

RMU concludes its home stand Saturday against Bryant, before hitting the road to take on LIU Brooklyn and Fairleigh Dickinson on Feb. 5 and 7, respectively.