The Colonials charge past Falcons for game one victory 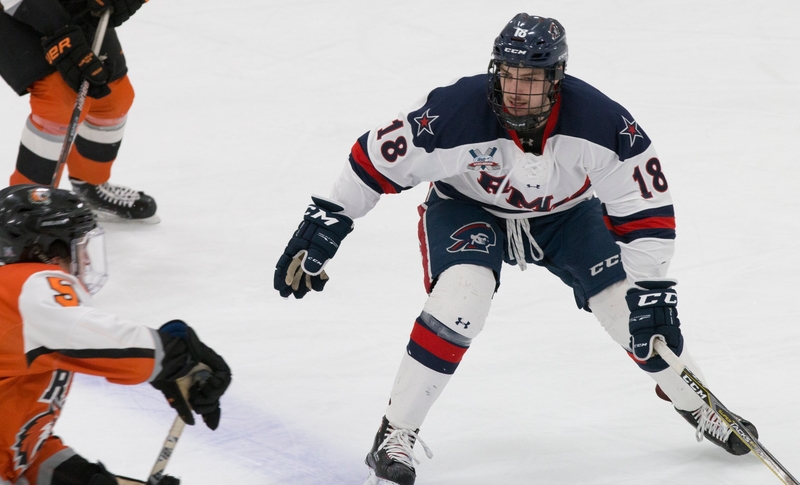 The Robert Morris University Colonials hosted the Bentley University Falcons for the AHC semifinals game Friday night. The Colonials won game one with a score of 3-1 to take a 1-0 lead in the series.

In the first period, both teams were getting pucks to the net, but both goaltenders denied those chances. A Colonials player had a chance to score on the breakaway but shot the puck wide of Falcons goalie Aidan Pelino.

During the second period, both teams got more aggressive, but it wasn’t until Colonials forward Alex Tonge got the Colonials on the board to make it 1-0 and earned his 14th goal of the season with assists from Timmy Moore and Brady Ferguson.

“Fergie (Ferguson) made a nice play to Timmy (Moore), and Timmy put it across and was able to skate into it, and the goalie (Pelino) lifted his arm a little bit and snuck it through,” said Tonge on describing his second-period goal.

With minutes left in an exciting third period, the Colonials forward Brandon Watt netted his second goal of the season with assists from Moore and Ferguson. Then with a minute left into the third, the Falcons’ player Kyle Schmidt put one past Colonial goalie Francis Marotte to make it 2-1. As if the scoring wasn’t over, Colonial forward Alex Tonge nets an empty netter to give the Colonial’s a 3-1 lead and 1-0 lead in the series.

“I thought we were pretty good,” Schooley said. “I really liked our effort as far as our backchecking or shot blocking. I thought we played with a lot of intensity and we played for 60 minutes.”

Even though the Colonials played well tonight, they have small improvements for Saturday’s game and to finish out the series.

“We have to limit our neutral zone turnovers,” said Schooley. “We gave up a lot of odd-man rushes to give them (Falcons) some chances, but we have to go out and play and give it another Herculean performance to end a team’s season.”

Overall, Schooley has one big takeaway from Friday’s game.

“We have to win. We’re up one-nothing. It’s a big takeaway,” Schooley said.

Game two of the first-round series will be Saturday evening with puck drop scheduled for 7:05 p.m.