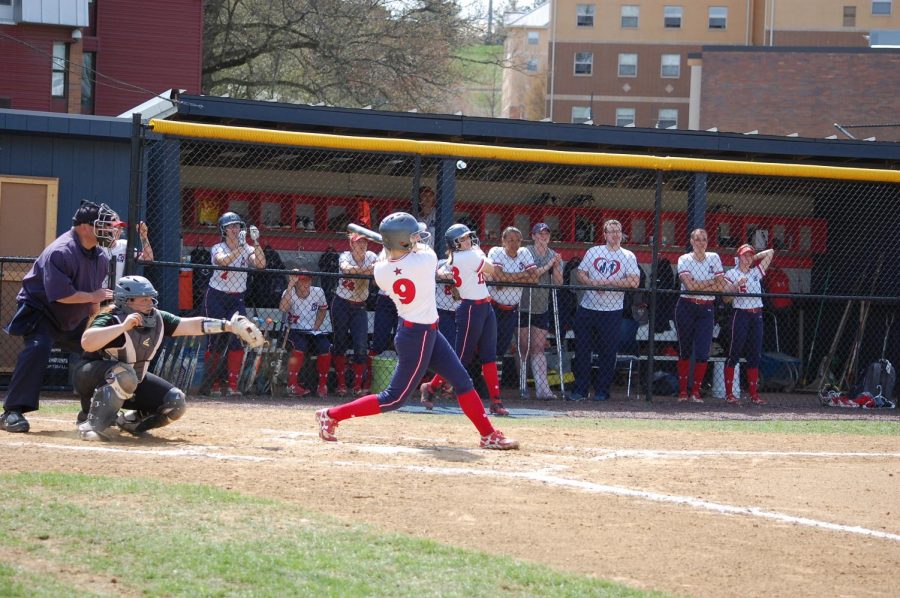 MOON TOWNSHIP– The Robert Morris softball team (13-34, 4-6 NEC) plays one of their last home games before the NEC Tournament against the Mount Saint Mary’s Mountaineers (24-25, 8-6 NEC) on Sunday, April 28th at 2 p.m. and 4 p.m. The Colonials last took on the LIU Brooklyn Blackbirds (28-14, 9-1 NEC), and the Blackbirds took both games against the Colonials. The last games for the Mountaineers were against the Central Connecticut State Blue Devils (15-19, 2-7 NEC) and Mount Saint Mary’s won both games.
Recapping RMU
The Colonials have dropped their last seven games. They dropped their second game of a doubleheader against Wagner and were swept in doubleheaders by Kent State, Akron, and LIU Brooklyn. Robert Morris will look to get back on the winning track as the season winds down.

RMU has three more doubleheaders before their regular season ends. The games against the Mountaineers will be the second to last home series for the Colonials this season.

In their games on Saturday, the Colonials fell to LIU Brooklyn. Game one featured the Colonials falling by a score of 13-10. Robert Morris had 14 hits and managed to get 10 runs across the plate. Despite this, their five errors cost them in the end.

In game two, RMU fell 7-1. In this game, the Colonials only got five hits. They also committed another three errors in this game.
Recapping MSM
Mount Saint Mary’s has won six out of their last seven games. Their last two victories came against Central Connecticut State, which were important NEC wins.

Despite falling behind early in game one of their doubleheader, the Mountaineers scored three runs in the second inning of the game. They would lose the lead but had an incredible walk-off home run to win the game.

In game two, Mount Saint Mary’s won yet again by a narrow margin. They scored early in the game but allowed the Blue Devils to tie the game. In the bottom of the fifth, the Mountaineers scored to give them a 2-1 lead. This would stand and ended up being the final score.
Players to watch
Abrielle McCartney (Robert Morris): As a senior, she is very disciplined and consistent on the field. She leads the team in batting average with a .314 and she had a slugging percentage of .467. She had only been struck out 11 times this season and had 17 RBIs.

Dana Vatakis (Robert Morris): Even as a freshman she is the most consistent arm in the circle for the Colonials. She led the team in having the lowest earned run average with a 4.25 and had the most innings pitched with 115.1.

Katie Olson (MSM): She has the lowest earned run average of the entire pitching staff with a 2.86 and has struck out 27 batters in 73.1 innings pitched. She has only allowed two home runs to be hit off of her, then has 30 earned runs scored against her.

Shelbee Holcomb (MSM): Leads the team in batting average with a .400 and a slugging percentage of .542. She had 20 RBIs this season plus three home runs as a junior she brings the experience to her game and gets the team ahead of their opponents.
Prediction
I think the Mountaineers will beat the Colonials in both games thus increasing the Colonials’ losing streak even more. The Colonials play their last home game of the season against the Sacred Heart Pioneers (25-25, 8-5 NEC) on Saturday, May 4th at 2 p.m. and 4 p.m.