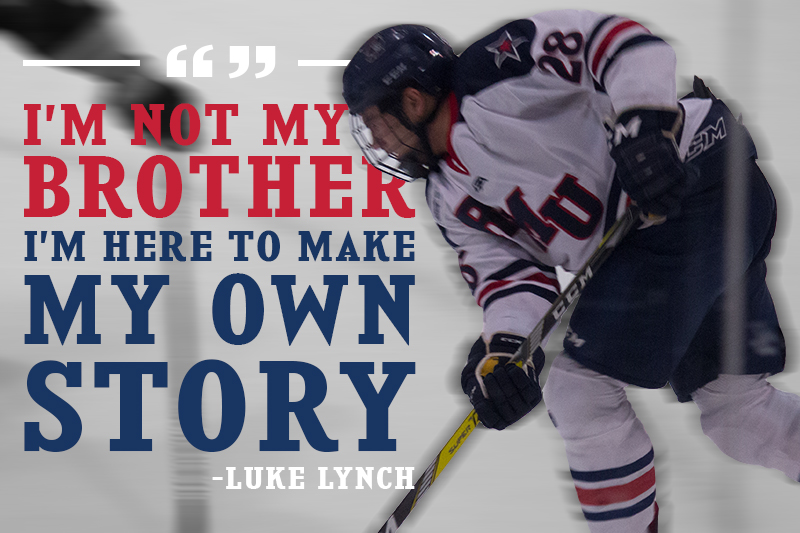 ‘Lynch’ has been a big name around Robert Morris since Zac Lynch broke the ice back in 2012. Zac was one of the best players to ever play for Robert Morris, and the Lynch legacy lives on through Zac’s little brother, Luke.

Luke has a lot to carry being a Lynch. Coming from the Johnstown Tomahawks, the NAHL prospect averaged just under one point per game in his final season. Lynch saw the most production he has ever had, amassing 56 points in 57 games.

Lynch started skating when he was three years old and has been playing hockey ever since. But hockey hasn’t always been the sport of choice for him.

“I played lacrosse and baseball growing up but hockey is a little different,” Lynch said.

Lynch always had a soft spot for hockey. It gave him a feeling that the other two sports couldn’t match. “Every year you have a new family,” he said. “It’s a long season, so you always have each other’s back. It’s a unique sport for how hockey works and being a part of a hockey team it’s an experience like no other.”

The obvious and easy comparisons — something that has and will continue throughout his career — are to his older brother, but that’s something Lynch wants to avoid. Lynch was adamant that he is not his brother.

“I’m not my brother,” he said. “I’m here to make my own story and be a part of this winning program.”

This is not meant as a slight to Zac, but as a way to remind people that Luke is not simply an extension of his brother. And any expectations of him to be Zac would not be fair.

What is expected of Luke is to be himself, to play to the best of his abilities. Head coach Derek Schooley emphasized that.

“Luke is working hard and playing well in his own end,” Schooley said. “Luke is doing everything we ask, we’re not asking him to score goals. If Luke gets half the goals of Zac, it’s been a successful career.”

Lynch is very much his own person and is out to prove that this season and for his career.

So far this year, Lynch has two goals and four assists for six points in seven games. On Nov. 5 against No. 11 Ohio State, Lynch put up both of his first two collegiate goals — the latter being a crucial short-handed goal — to push the Colonials to a 4-4 tie.