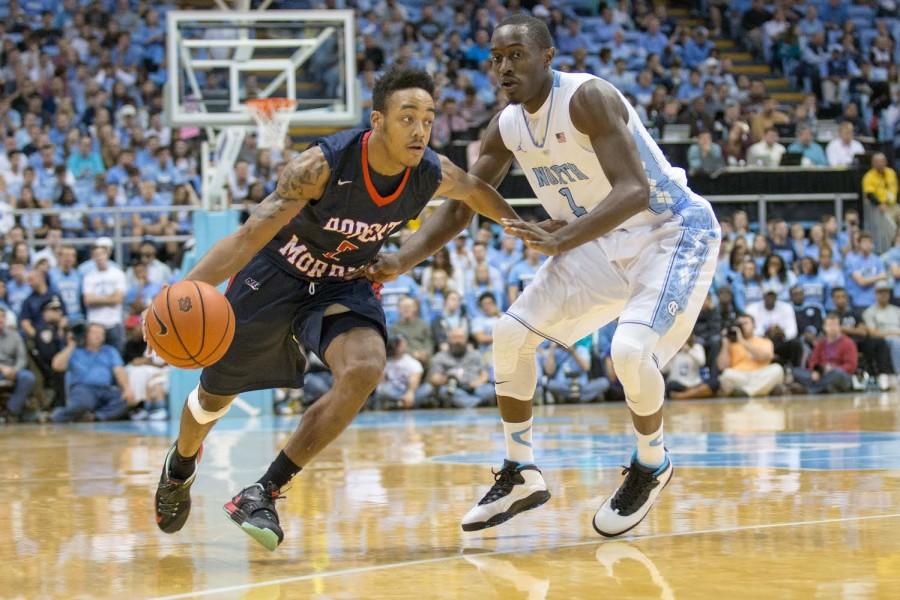 Despite a 24 point performance from Marcquise Reed, Robert Morris could not upset No. 6 ranked North Carolina Sunday night in the Battle 4 Atlantis Tournament.

Chapel Hill, N.C. – Before the beginning of Sunday’s game against North Carolina, Marcquise Reed trotted out of the visiting locker-room and emerged onto the court from underneath a portion of bleachers, only to view a two tiered sea of baby blue.

Upon stepping foot on the floor, the Robert Morris guard gazed in awe at the 21,750 seat Dean E. Smith Center, soaking in a tradition of history as rich as the university’s $2.381 billion endowment.

Though as soon as RMU tipped off its second game of the 2014-15 season, he concentrated on one thing and one thing only.

“I just took it as any other game. … It’s a blessing to play [in the Smith Center],” he said. “I just took advantage of my opportunity. I caught myself looking around, but when the game started, I got myself back focused and was like, ‘It’s just another basketball game. I have to go out and play as hard as I can.’”

Despite exploding for 24 points in 24 minutes of action, Reed and the Colonials (0-2) were unable to fend off the No. 6 ranked team, dropping a 103-59 decision to UNC (2-0) in the first game of the Battle 4 Atlantis Tournament.

That’s when the Landover, Maryland native, who was playing in his first collegiate road contest, took matters into his own hands, netting RMU’s first 12 points.

“He [Reed] was sensational. … He ought to feel awfully good about it and the coaching staff probably feels better than he does about it,” North Carolina head coach Roy Williams said of the Colonials’ newest freshman phenom. “… If you have a freshman going on the road, 10-15 in his first road game, then that’s pretty impressive.”

Even though Robert Morris came within eight with 5:33 remaining in the first half, the Colonials could not keep up with UNC’s fast-paced transition offense and, as a result, trailed, 53-35, at the break.

The final 20 minutes of play were no different.

Even though the 13,579 fans in attendance may have been surprised to see a true freshman shoot 66 percent from the field against a powerhouse program, Reed’s performance was not a shock to Toole.

“… It’s something that we’ve seen him do in practice, we’ve seen him do in workouts and so no one on our bench was surprised that he was able to do those kind of things,” the fifth year coach said. “And like I tell him all the time, as soon as he continues to grasp the defensive side of the floor, he’s going to have even more opportunity to continue to do those kind of things.”

While one may not think that there are many positives to take away from a 44 point blowout, Reed seems to disagree.