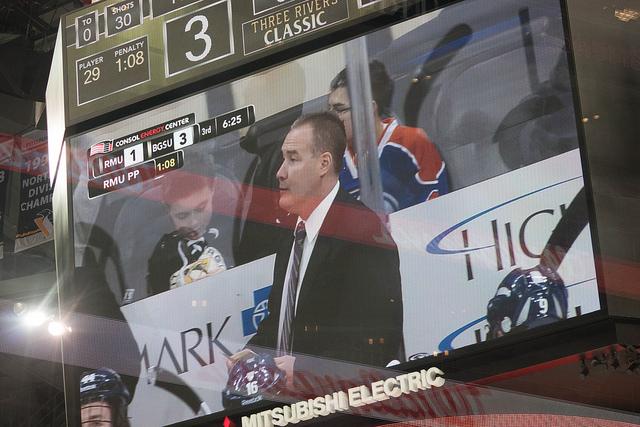 RMU Hockey’s series this weekend against Air Force is a competition more than conference-deep.

Serratore was head coach and general manager of the United States Junior Hockey League Omaha Lancers, a team that Schooley can credit his college signing to.

After some effort, Serratore recruited 19-year-old Schooley to help lead the Lancers.

“(Schooley) was real good player, a real smart player. It doesn’t surprise me that he went on to coach because even as a player he had a great understanding for the game,” said the Air Force bench boss.

“Some players just get it. You just get the game and all the different facets and he was one of those kinds of guys.”

RMU’s Cinderella story last season wasn’t Schooley’s first. In 1990, the Lancers’ season was looking grim, as they were cemented at the bottom of the USHL standings. The team flipped their season 180 degrees and managed to pull off the first ever league championship in Omaha history.

After graduating from Western Michigan, Schooley went into coaching. It didn’t take long for Serratorre, who is known for hiring former players, to snatch him up as an interim assistant coach. The next year, “interim” vanished from Schooley’s title.

“If he hadn’t have given me my first full-time job, I don’t know where I’d be right now,” said Schooley.

The two keep in touch to this day, talking strategy and teams, although the talk is a bit hushed now, since they’re both in the same conference. Each of them knows the other’s habits, which makes the game even more of a chess match.

“I’ve got a little bit of an idea of what he likes to do and when he likes to pull his goalie,” said Schooley. “It’s more of a competitive friendship. I respect him and I respect the way his team plays and hopefully that’s the way that we play.”

The two have “hockey retreats” every summer. Their wives are friends. In fact, Serratore’s wife is the godmother of Schooley’s oldest daughter. It’s a strong friendship.