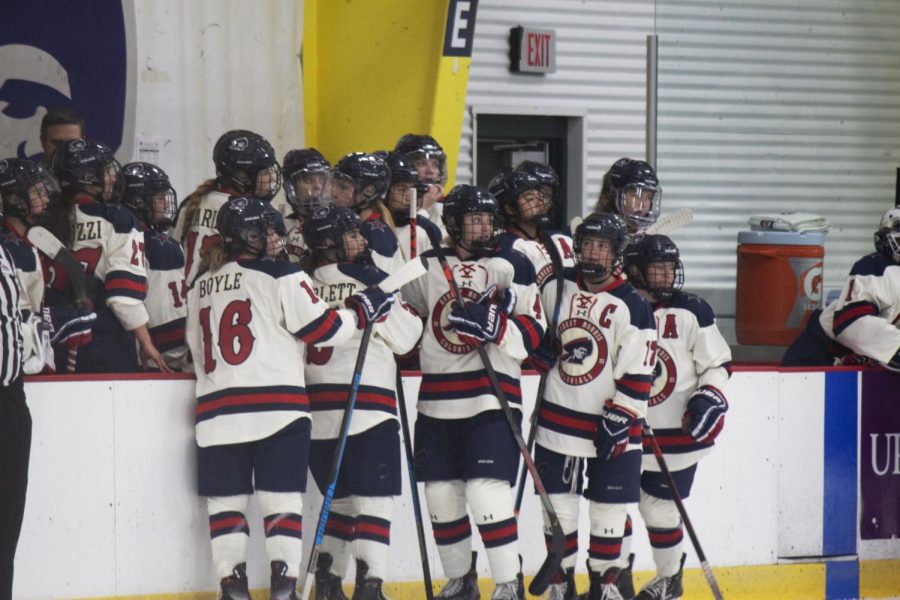 As another semester begins here at Robert Morris University, winter sports are in full swing, while spring sports are just around the corner. With all of this in mind, let’s take a look at three bold predictions for this upcoming semester for RMU Athletics.

Over the past few years, it seems like Derek Schooley’s men’s hockey program (9-10-3, 9-6-3 AHA) hasn’t been able to get over the hump when it matters; the Atlantic Hockey Championship. In recent history, the Colonials lost to AIC last year in the semifinals, and lost in the finals to Air Force in both the 2016-17 and 2017-18 seasons. In fact, the last time that the Colonials won the Atlantic Hockey Championship was in the 2013-14 season.

This season, the Colonials are built differently. Due to the graduation of last year’s leading scorer Alex Tonge (19-20-39), the leading scorer on the Colonials, Nick Prkusic is only on track for 26 points in 31 regular-season games. Where the Colonials thrive this season is in the net. Thanks to the addition of Ferris State graduate transfer Justin Kapelmaster, the Colonials are having one of their best seasons between the pipes. Kapelmaster currently posts a .941 save percentage (the highest in team history) and a 2.22 goals against average (third highest in team history).

Coach Schooley will still have to wait and see if the offense can potentially find it’s way, but it’s worth noting that during the 2013-14 season, Terry Shafer (’16) posted a .911 save percentage and a 3.02 goals against average to pave the way for a Colonials Atlantic Hockey Championship.

2. Nneka Ezeigbo becomes one of the top-five scorers in RMU women’s basketball history

Nneka Ezeigbo has etched her name into the RMU women’s basketball history books already. In November of 2019, she joined the 1,000 point club in a dominant 18 point performance that also saw her pull down nine rebounds.

Averaging 14.9 points per game this season, I think that Ezeigbo climbs the ladder of the RMU women’s basketball team’s all-time leading scorers even more than she has already.

Despite her currently being 11th on the list, I predict that Ezeigbo claws her way to the fifth position. She has 254 points so far this season. If she scores her average in the remaining 12 games of the season, she will have approximately 1,368 points.

That number puts her at sixth all-time, one spot off of my prediction, but I believe that RMU will make the NEC Tournament and score enough points in those games to squeak into the top five.

After winning back-to-back NEC Championships, the Robert Morris men’s lacrosse team is looking to win three straight berths to the NCAA Tournament, something that hasn’t been done since the Bryant Bulldogs went to four straight from 2012-15.

In the NCAA Tournament over the past two seasons, the Colonials have put up a valiant effort, losing 19-10 to eventual champions Virginia. The year prior, the Colonials gave no. 1 tournament seed Maryland a scare, losing only 14-11.

However, this season will be more difficult for Andrew McMinn’s squad, as last season’s leading scorer Tyson Gibson (29-40-69) was drafted first overall by the National Lacrosse League (NLL)’s New York Riptide back in September. However, the Colonials do have junior Corson Kealey, who was second on the team with 62 points (52g, 10a).