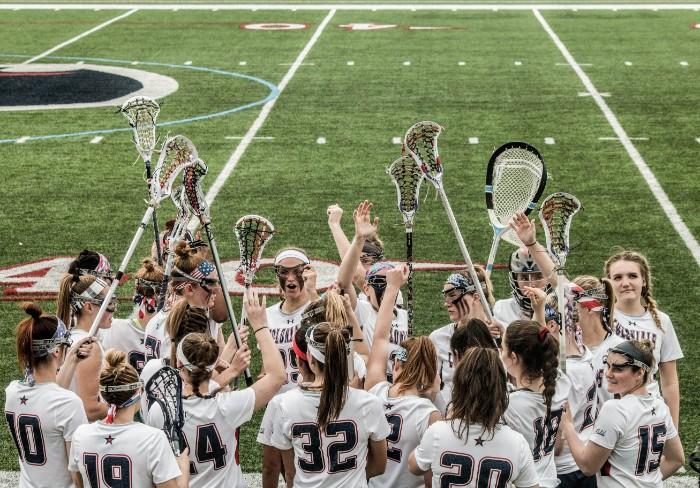 MOON TOWNSHIP, Pa.– In their final regular season contest of the year, the Robert Morris women’s lacrosse team (12-4, 5-2, NEC) held off NEC foe Central Connecticut State (2-14, 0-7 NEC) by a score of 18-5. With the win, the Colonials have now won their past five games heading into NEC Tournament play.

The Colonials scored the first two goals in the game thanks to Melanie Gandy and Hannah Miller. However, the Blue Devils stormed back, scoring three straight to take a 3-2 lead. Molly Coogan scored once and Morgan Sinton scored twice.

Kerry Sayrafe added a goal for the Colonials, and Morgan Sinton scored her third of the game for CCSU. The game went into halftime with a Robert Morris leading 8-5. Robert Morris also led 21-10 in shots.

In the second half, it started out all Colonials, and it ended with the confidence still on the home sideline of Joe Walton Stadium. Melanie Gandy completed her hat-trick less than three minutes into the half. Kelley Flynn added her fourth of the year soon after that.

With less than 10 minutes gone in the half, Mackenzie Gandy completed her hat-trick, just like her sister. In just a three minute span, Kerry Sayrafe scored twice and Clio Kerr scored her second of the game to give the Colonials a 14-5 edge.

The momentum continued in the Colonials’ favor as freshman midfielder Emilie Kim scored just her third of the year with just under 12 minutes to go in the game. To end the game, Shannon Lynch scored her 16th of the year, and Thalia Zolis reached 12 goals on the year as well.

Kelley Flynn scored her fifth of the year, and second of the game with only 36 seconds left to give the Colonials an 18-5 lead, and that was the score at the final whistle.

Up next for the Colonials is an NEC Tournament semi-final appearance against the Wagner Seahawks (13-3, 6-1 NEC) on Thursday, May 2. The game will take place in Staten Island, New York at Hameline Field at Wagner College Stadium. Opening face-off will take place at 11:00 a.m.