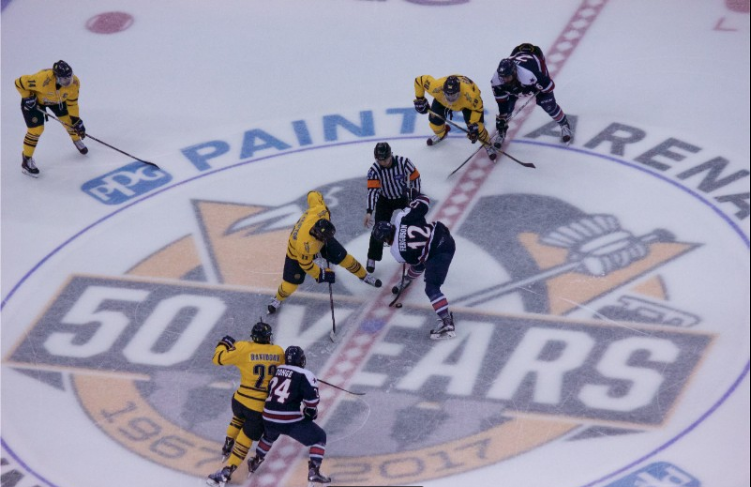 The second day of the Three Rivers Classic kicked off with the consolation game between #6 Boston College going up against Ferris State. Boston College lost on the first day by a score of 3-1 to Quinnipiac and a few hours later Ferris State fell to Robert Morris 1-0.

The two teams squared off in what would be a very physical game. They were both clearly frustrated with their performances the day prior; therefore, they took it out on one another.

Just 14 seconds into the game, the lamp was lit by Ferris State’s own Corey Mackin. A beautiful goal scored off of a lucky bounce that put the puck in front of Mackin. He put the puck just beyond the reach of Edquist’s mit.

Boston College would go on to dominate the Bulldogs on the shot clock where after 40 minutes of play, they doubled Ferris State’s total with 40 shots on net but still couldn’t get the puck behind Justin Kapelmaster.

The goaltender was phenomenal some more in the third period as he stopped not one, but two breakaways and even a second shot off of one of them as the puck went to the front of the net.

With Boston College on the powerplay, Kapelmaster found himself without a stick and the puck in his crease. Somehow, he found a way to keep the puck out.

With a roar from the crowd, Boston College’s Michael Kim finally cashed in on the second power play in a row for the Eagles. The call on the ice was a goal but the referees had to make sure they were correct so they reviewed it. The call on the ice stood, the game was tied at one.

The third period would end in a tie at one. Boston College was still heavily outshooting Ferris State by a tally of 56 to 34. Both goaltenders were outstanding up until the point where 5-on-5 overtime began.

With 2:26 remaining in overtime, Boston College’s Christopher Brown took a tripping penalty sending Ferris State on the powerplay. The Eagle’s fans were not happy as boos rained down from the seats.

The powerplay would end with no goal scored as would overtime itself. An amazing save by Justin Kapelmaster kept the game tied with seconds left in overtime. This game would head to a shootout.

Boston College would shoot first, Austin Cangelosi’s shot was blocked by Kapelmaster. Craig Pefley would go next for Ferris State, trying to go five hole but ran into the pad of Edquist. JD Dudek went next and put it in behind Kapelmaster, this time the five hole worked. Jared Mayhew shot for Ferris and it was blocked by Edquist. Matthew Gaudraeu with a chance to end it but cant cash in. Corey Mackin with the game on his stick, couldn’t beat Edquist.

Boston College would win this game in overtime by a score of 2-1.

This meant that Ferris State would claim fourth place in the tournament and Boston College would steal third. The championship game between Quinnipiac and Robert Morris would be next.