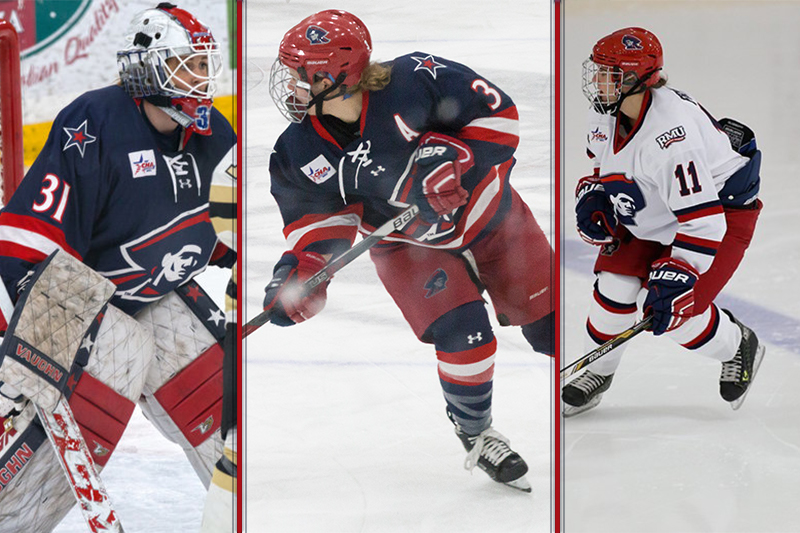 Howard was the first of the Colonials to be selected as the Ontario native was picked with the second pick of the second round (eighth overall) by the Toronto Furies. Howard is arguably the best player in the history of the RMU women’s hockey team as her name is all over the record books.

She holds the records for most goals (79), assists (102) and points (181) in Colonials history. The former assistant captain has also led the Colonials in scoring in each of the last three seasons.

The second Colonials selected Sunday was Milne-Price. Milne-Price was picked third overall in the seventh round (36th overall) by the Markham Thunder. The Thunder will be returning to the ice this season as the defending Clarkson Cup Champions after Capturing the CWHL title with a 2-1 overtime victory over Kunlun Red Star

She was thrust into the starting job during her senior year with the Colonials, and she did not disappoint. Last season with RMU, Milne-Price recorded a .927 save percentage. Milne-Price also was able to record 6 shutouts during her senior campaign which set a record for the Colonials. She became the third goalie in RMU history to have back-to-back shutouts and the first in program history to accomplish this feat twice in the same season.

Another record that Milne-Price holds for the Colonials is time allowed without allowing a goal. She set this record on Feb. 16 at 181:09. This streak of keeping the net empty dated all the way back to Jan. 27.

The third and final Colonial selected on Sunday was Fraser. She was selected with the fourth pick in the ninth round (47th overall) of the draft. The Ottawa native was selected by the Calgary Inferno.

In her time with the Colonials, Fraser was a constant on the lineup card. The 22-year-old played in a whopping 138 games over her four years at RMU. In each of these seasons, Fraser appeared in over 30 games.

Fraser was also a contributor off the ice as well, as she and teammate Jessica Gazzola helped out the community by raising nearly $600 for the Children’s Institute of Pittsburgh as a part of their senior project for Colonial Leadership Academy.