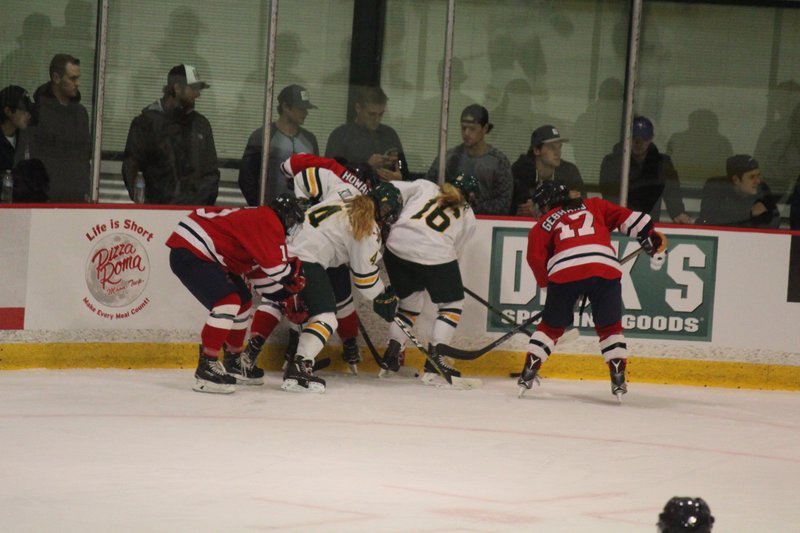 The Robert Morris University Colonials ended their final contest against the University of Vermont Catamounts with a disappointing 2-2 tie.

Following a close win Friday night, the Colonials looked to move ahead in the standings with another win over UVM. However, the Catamounts came out strong and gave the Colonials a run for their money.

The game started off a little slow, it gradually picked up speed. Going after loose pucks and rebounds, the crowd began to see some great opportunities.

At 7:48 of the first period, RMU junior forward Brittany Howard got off a shot through the chaos around the net. She was assisted by linemates freshman forward Jaycee Gebhard and sophomore forward Amber Rennie.

This goal only added to the hype of what is shaping up to be the Colonials’ top line.

“For sure,” Howard responded when asked if playing with Rennie and Gebhard was natural. “They make it easy for me. It’s definitely nice to play with them.”

Robert Morris’ lead was short lived, however. At 9:36, Kourtney Menches tapped the puck behind senior goaltender Jessica Dodds from just outside the crease, bringing the score to 1-1.

There were only three minor penalties given in the first period, two of which to Colonials players for tripping and interference. Moving forward, however, the crowd saw the physicality pick up again as it did the night before.

Exchanging some even plays, the two teams played in the neutral zone for the first half of the second period.

It wasn’t until 14:30 that Howard stepped up big again and was able to deflect another rebound in. She was assisted one again by Gebhard and Rennie, the line’s second goal of the night.

“We had a good chip from Jaycee (Gebhard) in the defensive zone, and then honestly, it turned to a pile on in front of the net,” said Howard of her second goal. “I ended up on top of Rennie, who was trying to get a stick on the puck. It just went in.”

RMU would remain in the lead for the duration of the second period.

Coming back after the second intermission, however, it was the Catamounts’ time. Momentum shifted, and the Colonials found themselves protecting Dodds for a large portion of the final period.

At 13:48, the referees called a questionable tripping call on freshman forward Natalie Marcuzzi, sending the Colonials to the penalty kill.

At 15:15 the Catamounts finally broke through with a shot from Taylor Willard. She was assisted by teammates Alyssa Gorecki and Daria O’Neill.

The clock wound down, and the teams faced sudden death overtime. Battling hard and sacrificing everything, neither team was able to score, and the game ended in a tie.

The Colonials did suffer a loss, however. Senior forward Maeve Garvey sat out over half of the third period due to an apparent injury to her wrist/hand, which she sustained blocking a hard shot from a Catamount defender. The extent of that injury is unknown at this point.

The Colonials are looking forward, though. They are ready to prepare themselves for two games on the road against Merrimack College next week.