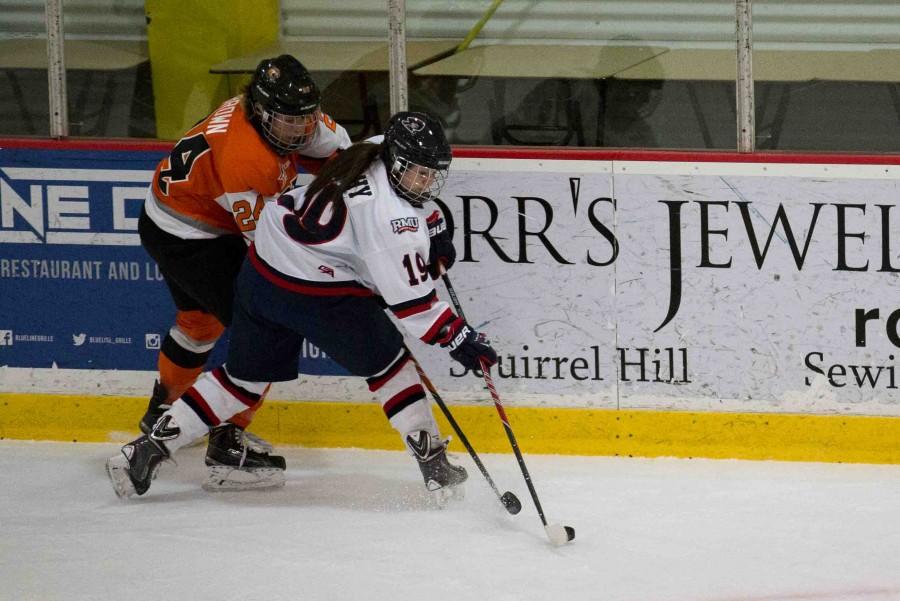 Maddie Collias leaned into Kelsey Gunn as the team formed a half-circle around the far corner of the rink for the playing of the alma mater. Her head down, looking at her shuffling feet for a distraction. Gunn put her arm around her, patted her on the back and one could assume said something to try and cheer her up.

The Colonials lost to the RIT Tigers in the second game of their best-of-three series on Saturday afternoon, falling 1-0. Like Friday, it was a loss that can only be attributed to the wild success of the Tigers to avoid walking under ladders, never break a mirror and tip toe by cracks in the ground.

Robert Morris attempted 81 shots today. Rochester attempted only 37. You don’t have to be a fan of hockey analytics to know that’s a major discrepancy. It’s nearly unheard of for a team to attempt so many shots and fail to win the contest.

Nearly. That’s a word the Colonials won’t be a fan of for a while. They came close on many attempts, driving play with crisp passing along the wall and a physical side that drove the Tigers portion of the crowd into hysteria. They failed to connect on so many wide open opportunities, Verizon was going to use the map to illustrate their 4G coverage.

There’s nothing to say about a game like this. A goal was scored in the first period, very early on. It came after an early rush by the Colonials, who played angry and fierce. A face-off was held from an icing call in the RIT defensive zone, and won by the Tigers. Caitlin Wallace retrieved the puck and swung it up to Lindsay Grigg along the wall for a two-on-one. Grigg fired a shot so fast it rivaled The Flash and made it by the blocker of Jessica Dodds.

Dodds played well after that moment. She seemed to be upset with herself for giving up a goal, and never let another one by her. Like the previous night, it would take a stroke of luck and brilliance to get past her. Nobody had it after Grigg’s shot.

The luck never swung the other way. Ali Binnington, the goaltender for RIT, managed impossible saves multiple times. Sliding across her crease, she’d find herself on top of the puck as it was halfway across the goal line. Halfway doesn’t count, sadly.

In the final two minutes, Dodds was pulled. The Colonials put out their most offensive unit yet, and held the puck deep in the offensive zone for as long as possible. With forty-five seconds remaining, the Tigers gained control of the puck and got it out of the zone. The Colonials wouldn’t enter again until inside of ten seconds, with a face-off win off an off-sides.

They won it back to Megan Eady, who rifled the pass to Amanda Pantaleo on the opposite side. She walked in, fired a slap shot. It was stopped, and the game ended 1-0.

Maddie Collias put her head down.