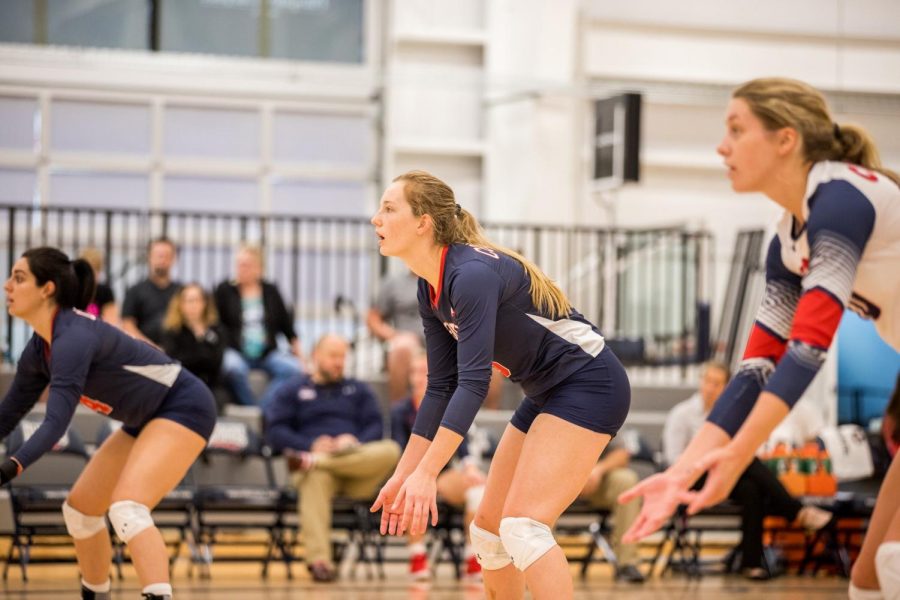 The Colonials are looking to try to get their ninth win of the season and more importantly, try to get to a consistent pattern of winning after struggling to an 8-14 overall record. The Blue Devils will be looking to rebound after they dropped their last matchup against the Bryant Bulldogs, with whom the Colonials are playing against on Saturday. Before the Bulldogs come to Moon Township, they will be playing another game on Friday against the Saint Francis University Red Flash (4-16, 3-4 NEC) at 7:00 p.m.

Taking a look at their last match against the Sacred Heart University Pioneers (12-6, 5-2 NEC), it was very easy to see the reason why the Pioneers were able to defeat the Colonials. The first two sets revolved around either getting on a long scoring run or just being able to score whenever possible, so the Colonials will have to find consistency when facing both Central Connecticut and Bryant.
Looking at the Blue Devils
Central Connecticut State is coming off a loss against the Bryant Bulldogs. The final set scores were 25-21, 25-14 and 25-21, all of which were in the Bulldogs favor. Despite the setback, the Blue Devils currently stand in a three-way tie for second place in the Northeast Conference standings with an 8-10 overall record and a 5-2 record in the NEC alongside Sacred Heart and Bryant. The Blue Devils are looking to break the tie and work their way to the conference title.
Looking at the Bulldogs

Bryant’s last four matches have been 3-0 final decisions. In four matches since Sept. 29, three of the Bulldogs’ matches were victories, the only loss being against Sacred Heart on Oct. 5 where they got swept. The Bulldogs are in a three-way tie for second place in the NEC, so they will be looking to break up the three-way tie and work their way to the NEC Tournament at the end of the season. Looking at the Bulldogs’ record last year, they had a 6-0 NEC record by the time they had played Robert Morris. This year their record is 5-2, so they still have the competitive edge from last year into this year.

Looking at the Bulldogs’ last game, they won by an attack error and two kills that gave them the sweep. Some people may consider it luck, but this is some skill for the Colonials to watch out for.
Players to Watch
Emma Granger (RMU): Granger, as of right now, is currently leading the Colonials in four of seven statistical categories. She leads RMU in attacks with a .294 attack percentage, 63 blocks, 216 kills, and serves.  If she keeps up with these types of numbers, she will definitely continue to be a player to watch for the foreseeable future.

Alyson Londot (RMU): Londot currently holds second in two statistical categories: attacks and kills. She has a .130 attack percentage and has 176 kills this season. As one of the top offensive leaders, she is on the rise to being one of the best performers in the NEC, and she can do that if she continues to have the types of performances that she has been having this year.

Madelyn Kaprelyan (CCSU): Kaprelyan has the edge of being the Blue Devils’ top performer. She has 209 kills and 3.27 kills per set, so it stands the reason she will be a foe for the Colonials.

Julia Flynn (Bryant): Flynn is arguably one of the biggest pieces on the Bulldogs’ offense, as she has 218 kills this year with 3.35 kills per set, which is highest on the team. The Colonials will have to prepare for all the possibilities that she may bring to the table.
Predictions
Central Connecticut vs Robert Morris:
For this match, I am predicting that Central Connecticut will come out on top. For the final score, I expect it to be three sets to one in favor of Central Connecticut. The Blue Devils currently hold a 5-2 NEC record, whereas the Colonials’ NEC record is 2-5, so Central Connecticut holds somewhat of an edge over Robert Morris record-wise. The reason for the three to one set prediction is because Robert Morris has always been capable of putting quality performances together, but CCSU still holds the edge on RMU given the circumstances.
Bryant vs Robert Morris:
For this match, I am predicting the Bulldogs to sweep the Colonials three sets to none. While the Bulldogs are in a three-way tied with Sacred Heart and Central Connecticut State, their overall record is 15-9. The NEC classifies standings just by the conference and not the overall record, so despite that classification, the success they’ve had will no doubt continue here. The Bulldogs also have a three-headed monster composed of Julia Flynn, Caroline Kennedy and Kristin Kingi who lead the team in 3.35 kills per set, 2.96 kills per set, and 2.78 kills per set respectively, so I am predicting that RMU will be swept by the Bulldogs.