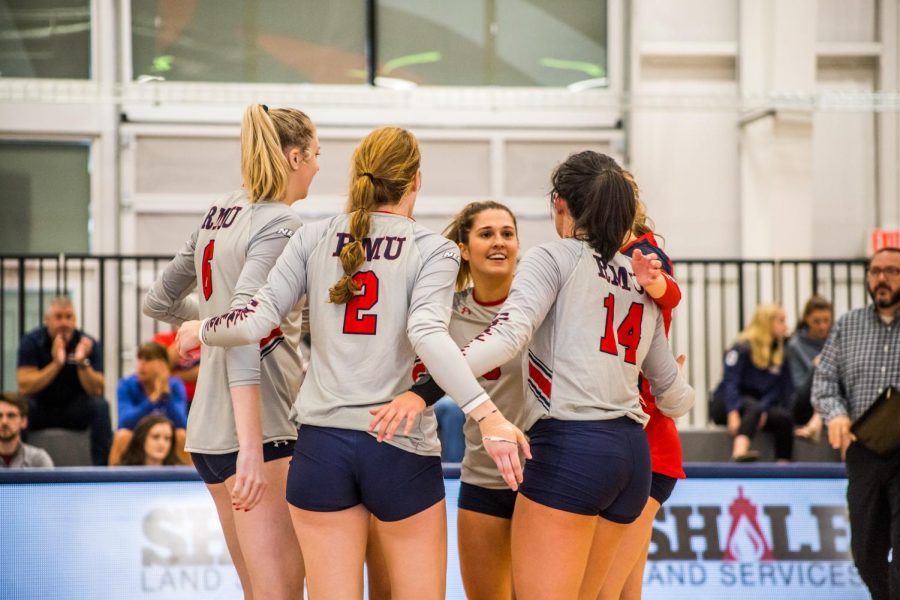 Leading the charge on the night for RMU was Taylor Lord. Lord set the team-high in kills on the night with a whopping 19. As for the Blue Devils, they were led on the night by Madelyn Kaprelyan who tallied 17 kills of her own to go along with 17 assists and a match-leading .438 attack percentage.

Coach Dale Starr said after the match that Lord “did what a senior should do” in regards to her performance on the court tonight. He continued to say that “he wishes that we could’ve given her a little more help.”

Lord was shocked to find out about her kill number on the evening and her initial reaction was simply “wow.” However, it is the chances that she left out on the court that haunted her the most on the night as she said, “I think that there’s more that I could’ve done.” She then recalled several of her missed opportunities.

However, after a timeout, CCSU would stretch their lead back to three points at 24-21 leading to a timeout by the Colonials. Following this time out the Blue Devils would secure the final point off of a serve that deflected off of the net and fell in the middle of the RMU defense. This point clinched the set for the Blue Devils at 25-21.

The second set started off tight-knit early, it did not take long for the Colonials to grab themselves a nice lead after they went on a 9-0 run to grab a 12-5 lead. The Colonials were able to sustain this lead throughout much of the middle of the set, but the Blue Devils refused to go down easy and they continued to fight back. At one point, the Colonials lead was shrunk back down to four points at 16-12.

RMU stretched their lead back out to seven points at 19 to 12, but CCSU fought back again and got the Colonials lead back down to four at 19-15. This four-point lead would soon diminish to a three-point advantage at 20-17, and then after an attack error by RMU’s Lord, the Colonials lead sat at just two points. It was at this point where Head coach Dale Starr decided to call a timeout.

After the timeout, the RMU lead would grow back to three points after a ball-handling error by Kaprelyan. After this, CCSU would grab three consecutive points and tie the set up at 21 points apiece. However, two consecutive attack errors CCSU caused by an Emma Granger and Lord block and another block by Granger and Mirna Sarjanovic gave the Colonials a 23-21 lead. This was then followed by a Granger kill, and another CCSU attack error caused by another block involving Granger. Freshman Megan Cannon also played a role on the block by the Colonials that won RMU their first set of the night at 25-21 and tied up the match at 1-set apiece.

The third set was yet another battle between the two NEC rivals as neither team could gain much of an edge as the two teams traded blows as well as the lead for much of the set. However, it was CCSU who was able to pull away from the Colonials towards the end of the set as their 21-18 lead prompted Starr to take another timeout. This three-point lead tied the largest lead held by either team during the set, but it would not last long as the Colonials would grab three consecutive points after the timeout to tie the game back up at 21 apiece thus prompting a Blue Devils timeout.

Following the timeout, the two teams traded blows in a fantastic volley that seemed to last forever, but ultimately the Colonials would gain the point, as well as the lead at 23-21 leading to another CCSU timeout.

Just like the rest of the evening, however, the Blue Devils would fight back and picked up two consecutive points of their own to tie the set at 23.

A kill by Maria Alfano would give RMU the lead at 24-23, but once again CCSU would respond. That response came in the form of a Kaprelyan kill which was followed by a kill from Raquel Quirarte to give the Blue Devils a 25-24 lead prompting another RMU timeout.

However, this was not enough as the Blue Devils would win the point and the set after a Taylor Lord attack error was caused by a block from Kaprelyan and Nicole Kramer. CCSU would win the set 26-24 and take a 2-1 lead in the match.

The fourth set started off much like the rest of the match as the battle continued with neither teams once again able to establish a dominant hold on the lead. Early in the set, Starr was given a yellow-card by one of the officials. This was followed by a shower of “boos” as the Colonial faithful displayed their dismay with the call.

Midway through the set, CCSU found themselves with a rare three-point lead, but this lead was quickly diminished back down to a one-point advantage. However, the Blue Devils would quickly establish their three-point lead at 18-15 which caused the Colonials to take a timeout.

Coming back from the timeout the Blue Devils grabbed their largest lead of the set at four points, and it was eventually stretched to five at 22-17. It was at this point where Starr called another timeout as the Colonials were on the brink of losing their final set of the night.

Unfortunately for the Colonials, the timeout would not be enough to turn the tides for RMU as two blocks by the CCSU defense stretched the Blue Devil lead to 24-17. After a pair of Blue Devil attack errors, Granger served the ball and the officials ruled that the ball was out of play. After a brief review, it was determined that the ball was in play and the Blue Devils won the point, set and subsequently the match at 3-1.

After the match, Starr said, “It’s getting frustrating to put yourself in a position to win and continually coming up short.”

Tomorrow’s game will take place at 5:00 p.m. at the North Athletic Complex.