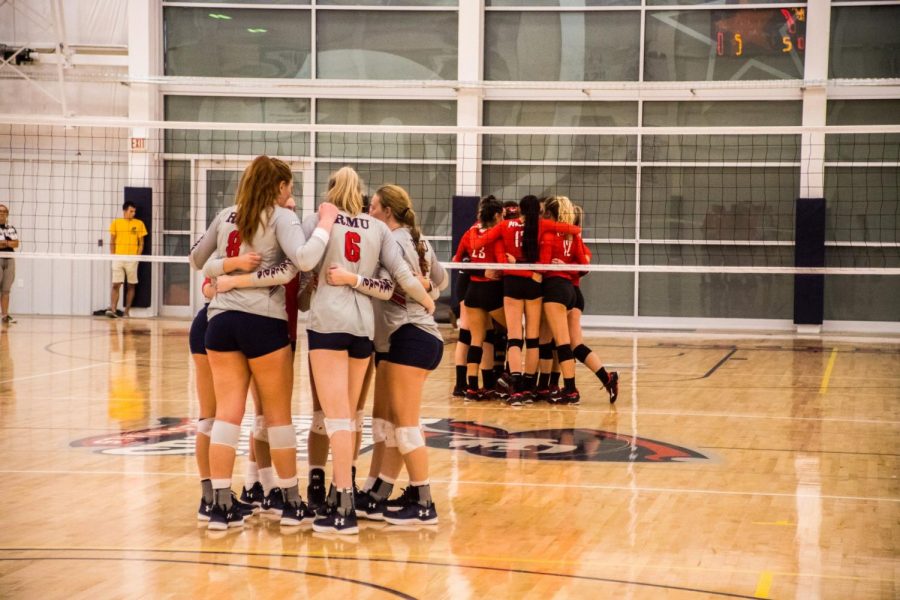 The Colonials started out the match with a 5-2 lead in the first set. The Red Flash would score eight unanswered points to take a 10-5 lead after the Colonials struggled to pass the serves of Nicole Adams.

After taking a timeout, Robert Morris was able to fight their way back into the set with four service aces in a row from sophomore middle blocker Emma Granger. Granger had a season high six aces in the match.

The Red Flash and Colonials fought back and forth late in the first set, but four unanswered points by Robert Morris, and a service error from Defensive Specialist Shannon Thomas, gave the home side the first set 25-21.

Both teams went on streaks of several points throughout the second set. Robert Morris reached a 22-19 lead and looked to finish out the set in the exact same fashion as the first. However, 3 straight points from Saint Francis tied the game back up at 22-22. Head Coach Dale Starr took a timeout the seemed to be the difference, as Robert Morris scored three straight points to win the second set 25-22.

In a similar situation of the second set, Robert Morris and Saint Francis traded points back and forth throughout most of the set. The Colonials continued a repeat of the previous two sets, as four straight points gave Robert Morris their fourth Northeast Conference victory of the season.

“We really played together well. If we were lacking in one area we would pick it up in another. We played for each other and we played for a team,” said Granger after the win.

Along with Granger, outside hitter Taylor Lord had eight kills and 10 digs in the match. Middle blocker Maria Alfano also had seven kills in the victory.

While the offense found a rhythm, the defense for Robert Morris was able to stifle the Red Flash offensive attacks. The Colonials had eight total blocks on the evening. Senior Libero Allie Yurkovich had 15 digs and Taylor Lord had 10 in the match as well.

Saint Francis was led by outside hitter Alexis Lambert and opposite hitter Madi Tyus, both with nine kills in the match. Kimmy Sweeney led the team with eight digs while only playing the third set.

Many players for Robert Morris were wearing pink to show awareness for breast cancer and raised funds for research in the first “Dig Pink” match hosted by Robert Morris since 2012.