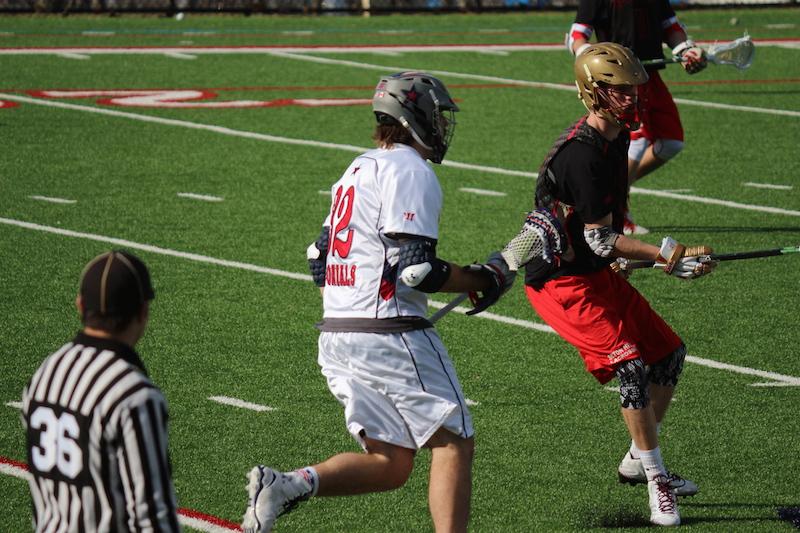 On a cold and cloudy day, the Robert Morris Colonials shined, with the Men’s Lacrosse team taking down the Sacred Heart Pioneers 12 to 7.

A game which started out highly contested and very physical was blown open by a terrible third quarter performance by the Pioneers, getting outscored by the Colonials 5 to 1. Key penalties by Mike Calvagna and Brian Masi of Sacred Heart allowed Robert Morris to take advantage of the shorthanded SHU squad and grab a 10-4 lead with seven minutes left in the third.

The Pioneers’ semblance of a comeback came with three unanswered goals through the end of the third and beginning of the fourth, but was quickly quelled by two RMU goals, solidifying the eventual final score of 12-7.

The Colonials were led in scoring by Adrian Torok-­Orban who had four hit the back of the net on the day, three of which came during RMU’s five-goal third quarter.

Great passing led to great opportunities, as there was a total of eight assists on the day to highlight Robert Morris’ excellent ball movement, which led to some spectacular goals.

Goalkeeper Alex Heger received the win in net, letting up three goals in 30 minutes of play with ten saves. Joining him in net was Matt Bukovac, who finished the day with four goals allowed and six saves in 30 minutes of time as well.

This win for the Colonials puts them at 3-­5 overall and 1­-0 in NEC conference play. Coming up for Robert Morris is a road trip to Mount Saint Mary’s next week, taking on the 4-­2 Mountaineers, who will be fresh off a bye week. With continued stellar performances from Adrian Torok­-Orban and James Rahe, RMU looks to make it 2­-0 in conference, and make a statement to the rest of the NEC.