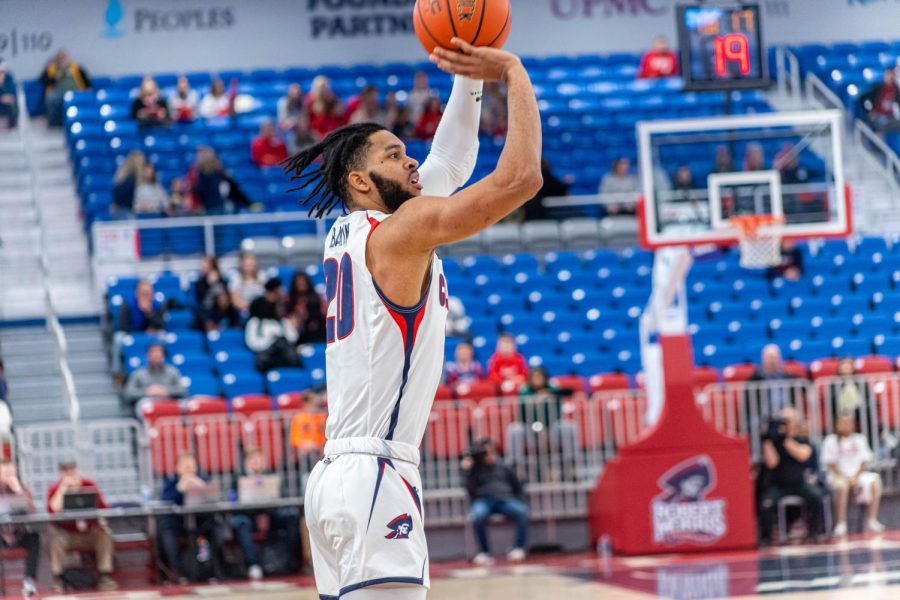 MOON TOWNSHIP– Another exciting weekend of Robert Morris University sports is set to begin with winnable matchups ahead. Colonial sports look to build off of and improve on last week’s performances, filled with mixed results, and set the stage for the back-half of the winter sports season.

The RMU men’s basketball team (9-11, 5-2 NEC) enters Brooklyn after an unexpected 78-57 blowout loss against St. Francis Brooklyn (9-10, 3-4 NEC) to face Long Island University (9-10, 4-2 NEC) on Saturday at 4:30 p.m. This is the first and only meeting between the two teams in the 2019-20 NEC season. After the upset on Thursday night, the Colonials need to bounce back against the Sharks to try and keep pace with Merrimack at the top of the NEC standings.

Sophomore guard Dante Treacy has been the main ballhandler for RMU while averaging 8.3 points per game and 4.7 assists per game this season.

RMU women’s basketball (11-6, 6-0 NEC) heads north to also take on LIU (3-14, 2-4 NEC) Saturday afternoon at 2 p.m. The two teams meet for the only time this season as the Colonials look to rack their winning streak up to seven in a row in conference competition. RMU is coming off of an impressive 73-43 victory over Sacred Heart (6-11, 3-3 NEC) on Monday at the UPMC Events Center.

Sophomore guard Isabella Posset, recently named NEC Player of the Week, is averaging 8.2 ppg and has totaled 43 steals in 17 games played this season and will be a player to keep an eye on as the Colonials come down the home stretch of conference play.

The RMU women’s track and field team will compete in the SPIRE Midwest Open on Saturday, Jan. 25. This is the third meet for Robert Morris after taking part in the YSU Invitational last weekend at Youngstown State University where junior Kaitlyn Hawkins took 5th place in the pole vault while freshman Elicia Moore also took home 5th in the women’s 500m. The Colonial throwing squad, under acting head coach Jon Yohman, looks to capitalize on their building momentum after having multiple personal record breaking throws last week at YSU.

Seeded at seventh in the NEC Conference ranking currently, the Colonials plan to improve their standing before heading into the conference meet in a few weeks.

The RMU women’s hockey team (13-9-2, 7-3 CHA) plays host to the Lindenwood Lions (4-14-3, 2-8 CHA) this weekend at Neville Island. The Colonials toughed out two hard-fought wins earlier in the season in Wentzville, Missouri. RMU defeated Lindenwood 2-0 and 4-3 en route to a sweep of the team’s season series in the Lions’ home arena. Friday’s matchup will begin at 3:05 p.m. and Saturday’s puck-drop is at 1:05 p.m.

Senior forward Jaycee Gebhard has accumulated 42 points this year and will look to continue her success as one of the best players in RMU history.

RMU Men’s hockey (9-10-3, 9-6-3 AHC) hosts the Yellow Jackets of American International (11-11-1, 11-5-1 AHC) in an important matchup between two solid AHA opponents. Friday (7:05 p.m.) and Saturday (5:05 p.m.) will be the only time these teams meet in the regular season and, with strong talent on both sides, these games will be a match watch. Both teams need to win this series to solidify their place in the conference standings and gain momentum for the rest of the season.

Senior goaltender Justin Kapelmaster has recorded 2.23 goals-against average and .938 save percentage in 2019-20.