Weekend Preview: Men’s basketball looks to come back after another hard loss 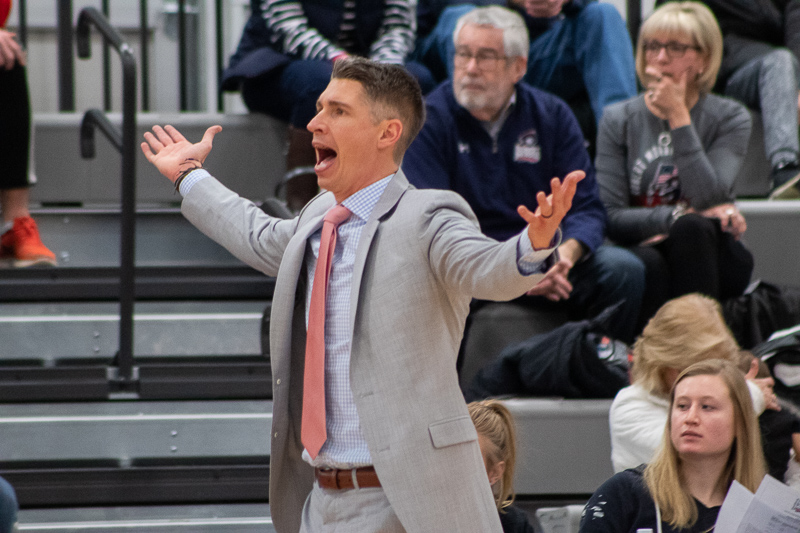 MOON TOWNSHIP — The Robert Morris Colonials men’s basketball team (12-11, 7-3 NEC) are on their home court this weekend as they take on the Bryant Bulldogs on Thursday, Feb. 7 at the North Athletic Complex at 7:00 p.m. The Colonials have a two-game losing streak coming into this game after suffering losses to the Fairleigh Dickinson Knights (11-11, 6-4 NEC) and the Saint Francis Red Flash (10-11, 6-4 NEC). The Bulldogs lost their last game to the Central Connecticut Blue Devils (10-13, 4-6 NEC).

The Colonials will also take on the Central Connecticut Blue Devils this weekend, but this game will be on Saturday, Feb. 9 at the North Athletic Complex at 4 p.m. The Blue Devils have a two-game winning streak coming into this game. The teams that the Blue Devils defeated were the Bryant Bulldogs and the Saint Francis Brooklyn Terriers (13-11, 5-5 NEC).
Recapping RMU
The Colonials last took on the Fairleigh Dickinson Knights and were defeated in double overtime by a final score of 97-94. The Knights had control of the game in the first half, scoring 47 points while the Colonials scored 38. In the second half the Colonials regained the lead as they scored 37 points while the Knights scored 28 points. In the first overtime, both teams scored 12 points which led to the second overtime. The Knights took the game away from the Colonials when they scored 10 to the Colonials seven points. The star players from the Colonials were Josh Williams with 34 points scored and Matty McConnell with eight rebounds. The star players for the Knights were Darnell Edge who scored 28 points and Elyjah Williams who had eight rebounds.
Recapping Bryant
The Bulldogs last took on the Central Connecticut State Blue Devils in a game where the Blue Devils came out on top with a 64-59 victory. In the first half the Bulldogs had control of the game with a score of 33-26, but in the second half, the Blue Devils kicked their scoring into high gear as they 38 points to the Bulldogs 26 points. The star players for the Bulldogs were Byron Hawkins with 17 points scored and SaBastian Townes with nine rebounds.
Recapping CCSU
The Blue Devils took on Saint Francis Brooklyn Terriers and won the game with a final score of 78-72. The first half the Blue Devils took a commanding lead as they scored 36 points to the 27 points of the Terriers. Even though the Terriers outscored the Blue Devils in the second half, the Blue Devils ultimately won the game 45-42. The star player for the Blue Devils were Tyler Kohl, who scored 29 points, and Jamir Coleman, who recovered nine rebounds. The star players for the Terriers were Jalen Jordan who scored 23 points and Yaradyah Evans who had seven rebounds.
Players to watch
Malik Petteway (RMU): Petteway has recovered 135 rebounds. He is more active on the defensive side of the court with 30 blocked shots and 30 steals. He can still score with the rest of the team with 95 field goals and 65 free throws scored.

Josh Williams (RMU): Williams had the most time on the court, and in that, he has scored 347 points on the season so far. He also led the team in field goals with 107 and had 77 three-point shots made also. He is not known for his defensive presence with only having 69 total rebounds but he led the team in assists with 54 so far this season.

Tyler Kohl (CCSU): Kohl is a big contributor in scoring with 126 points scored, he had made 104 free throws and can move the ball around with 102 assists. He also plays a major role on defense with a total of 160 rebounds and 30 steals.

Ian Krishnan (CCSU): Krishnan has the most time on the court but only had a few scoring opportunities to show for it. He had a total of 291 points scored and had 19 steals with 100 field goals scored.