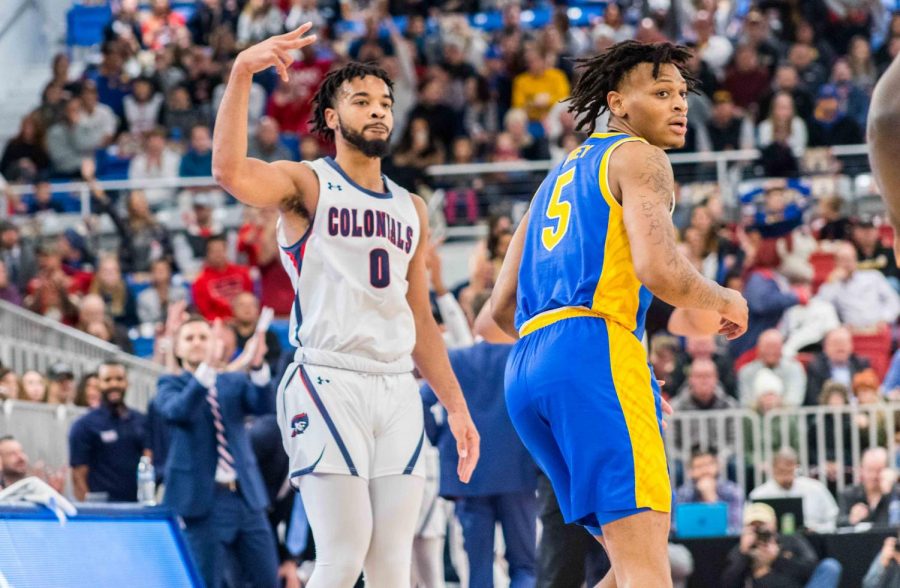 MOON TOWNSHIP– Another weekend of RMU sports has come to a close, and the Colonials found themselves looking at mixed results. Both basketball and ice hockey teams saw action, as well as the women’s track and field team, who participated in their first meet.
Men’s basketball falls to Merrimack
The Robert Morris men’s basketball team (8-10, 4-1 NEC) lost a tough back and forth battle against Merrimack (11-8, 5-1 NEC) on Saturday afternoon, 53-49.

The Colonials’ four-game winning streak to begin conference play was snapped, and the team fell to double-digit losses on the season as a result. With the win, Merrimack moves into first place in the NEC and overtakes RMU, winning the second of the two matchups between the teams.

Junior forward A.J. Bramah led the way for Robert Morris with 16 points and four rebounds in 31 minutes of play.
Women’s basketball remains perfect in the NEC
Women’s basketball (10-6, 5-0 NEC) found better results in their weekend matchup vs. Merrimack (10-7, 3-3 NEC) Saturday by a score of 72-50.

The lopsided victory completed the season sweep of the Warriors and pushed the Colonials’ win streak to five to start NEC competition. RMU continues to prove its dominance over the conference and take advantage of the opportunities presented to them.

Junior center Irekpitan Ozzy-Momodu recorded an impressive double-double with both 17 points and 17 rebounds in only 21 minutes. Sophomore guard Isabella Posset scored 16 points in the win.
Track and Field competes at Youngstown State
Women’s track and field traveled to Youngstown State for the YSU Invitational on Friday morning. Freshman Elicia Moore finished 5th in the 500 m and junior Kaitlyn Hawkins took 5th place in the pole vault. The team travels to Geneva, Ohio, next weekend on Saturday, Jan. 25 in the SPIRE Midwest Open.
Men’s hockey splits with Mercyhurst
Men’s hockey (9-10-3, 9-6-3 AHC) faced Mercyhurst (5-16-1, 3-12-1 AHC) in a home-and-home series over the weekend that saw home ice being defended by both teams. First, the Colonials fell 2-1 in Erie on Friday night with the Lakers scoring two goals in the second period. RMU only got one back, thanks to sophomore forward Justin Addamo’s goal in the third.

Saturday was a different story for Robert Morris, as the Colonials bounced back from their first loss to Mercyhurst since 2018 with a 5-1 win. The blue line of the Colonials contributed three of the five goals on the night, with sophomore Brendon Michaelian scoring twice and senior Sean Giles scoring the first goal of the game. Junior forward Nick Prkusic also tallied two goals for Robert Morris.
Women’s hockey splits against Syracuse
RMU women’s ice hockey (13-9-2, 7-3 CHA) hosted Syracuse (6-15-1, 5-3-1 CHA) over the weekend and split the series. Friday’s matchup, dedicated as Mental Health Awareness Night, saw the Colonials score five in a 5-1 win. Robert Morris dominated the third period of play to secure the victory. Redshirt sophomore forward Michaela Boyle once again led the way with two goals and junior forward Lexi Templeman, redshirt sophomore Kyleigh Hanzlik and senior forward Jaycee Gebhard all scored a goal of their own in the victory.

Saturday’s game provided less success for the Colonials offense. The Colonials fell 1-0 with Brynn Koocher scoring the lone goal of the night for the Orange. The Colonials lead the way in shots with a 32-24 differential but could not find the back of the net.

Stay tuned to RMU Sentry Media all year long for highlights and updates on all things RMU sports.