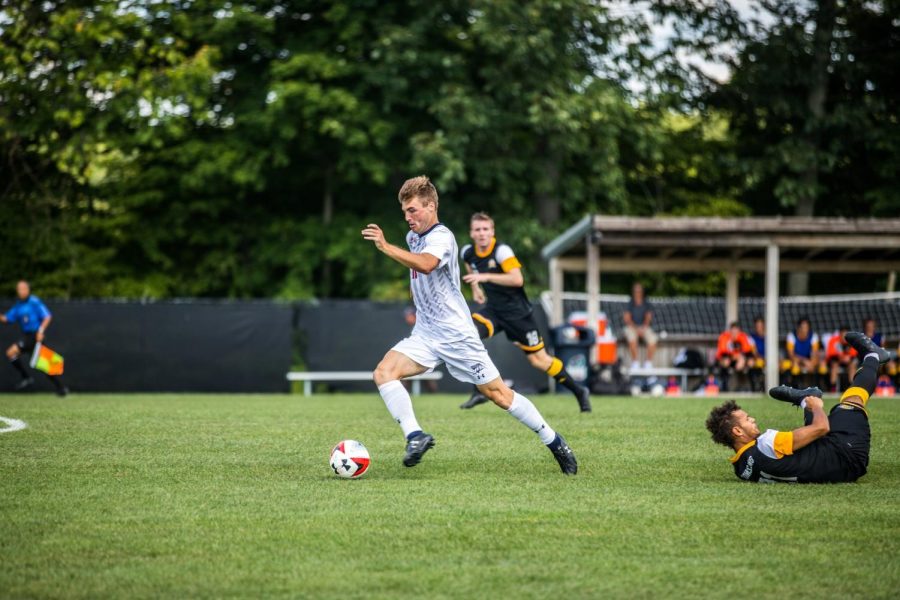 Women’s soccer opened the season with a victory over UMBC, but it’s been downhill for the last few games. In their game over Milwaukee, RMU wasn’t able to get any offense going, but goalkeeper Sydney Bruckner exceeded her career high in saves. The only goal scored by Milwaukee was scored by McKenna Stratton at the 44th minute.

The men’s soccer team was on the wrong end of a shutout streak on the offensive side when they fell to the University of Detroit Mercy Titans 1-0 on Friday afternoon in the first game of the RMU/Duquesne Tournament. Detroit Mercy controlled the majority of the first half and managed to score the only goal of the game from a penalty kick from Owen Pearce after the initial shot was blocked. After the Titans lost Collin Cavanaugh to a red card just before the first half ended, the Colonials and Titans exchanged some shots, with the Colonials getting some golden opportunities. Despite those opportunities, the Titans won the first game of the RMU/Duquesne Tournament 1-0.

Robert Morris took another hit to their record when they lost three sets to one in the first match of the Hokie Invitational in Blacksburg, VA. The sets ended with the final scores 22-25, 25-18, 19-25, and 16-25 respectively.

RMU couldn’t get on the winning path again in the third match of the Hokie Invitational as Virginia Tech took three sets to one with the scores of the first two sets being close. The final scores were 25-22, 21-25, 16-25, and 15-25.

In the first game ever for new head coach Bernard Clark Jr., the team had to take a 29-48 loss to the University of Dayton in which the offense was the biggest positive under the new coaching regime. RMU scored four touchdowns compared to Dayton’s seven. RMU starting quarterback Jimmy Walker had himself a great game as he threw for 219 yards and scored two touchdowns in the loss.

During this game, RMU was able to generate a little bit of an offensive spark in which both goals were scored by Jane Schleicher, but Valparaiso scored all four of their goals from Cory Griffith. After Sydney Bruckner played for the first half, backup goaltender Julia Schmid played in the second and gave up one goal in the process in the 4-2 defeat of Robert Morris.

Men’s soccer played on Sunday for the second game as part of the RMU/Duquesne Tournament. Senior Zac Sherman was the biggest offensive player in this game, as he scored the only two goals that the Colonials were able to get. After Sherman scored the first goal early on for RMU, UDM was able to score the next two goals, leading 2-1. After Robert Morris managed to tie the game later on, Detroit Mercy won the game 3-2 by Jim Barkei. This led to a sweep of RMU in their tournament.