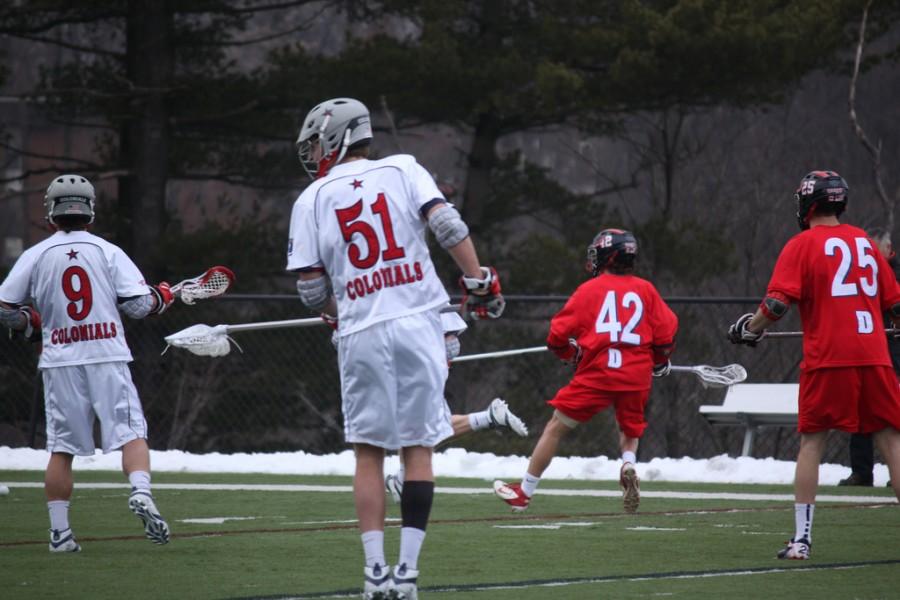 Air Force 10 (8-5), RMU 9 (2-11, NEC 1-3): At Falcon Stadium in USAFA, Colorado, the Colonials lost in heart break fashion as Air Force broke a 9-9 tie with a goal with only seconds left in regulation play. RMU was lead on offense by junior Luke Laszkiewicz who finished with five goals and received his eighth collegiate hat trick in the process. RMU went into halftime with a 4-2 lead but the Air Force came out of halftime with a purpose going on a four-goal run, securing the lead. RMU used a four goal fourth quarter to tie the knot at 9-9 as Laszkiewicz scored two of his goals and Carter Yepsen and James Rahe scored one goal each. Starting goalie for the Colonials chase Rose made eight saved but did receive the loss.

RMU 4 (19-17, NEC 7-0), LIU Brooklyn 2 (14-24, NEC 4-3): Playing without head coach Craig Coleman in the dugout, the Colonials remained perfect in NEC play as they one game one of a double-header against LIU Brooklyn. LIU got on the board first as they scored two runs in the third inning via a single two singles. However, in the bottom half of the third, the Colonials answered back scoring two runs themselves as Jordan Gurganus stole home and Haileigh Stocks tagged up and safely crossed the plate on a Tess Apke sacrifice fly to right field. The Colonials received the runs they would need to win the game in the fifth inning as Tess Apke hit a homerun bringing home Ashley Gerhart was on base. Senior Pitcher Nicole Sleith was in the circle for RMU as she improved her record to 16-8. Sleith struck out eight LIU hitters.

RMU 6 (20-17, NEC 8-0), LIU Brooklyn 5 (14-25, NEC 4-4), In Game two of a home double-header, the Colonials remained perfect in conference play as the finished the sweep of LIU Brooklyn. RMU jumped early on LIU scoring three runs in the first inning via an Ashley Gerhart triple and single by Kristen Gabelt. LIU picked up a run in the second inning but RMU had an answer as they scored one in the third inning and scored another run in the fourth answering another LIU run which LIU scored in the top of the fourth. In the top half of the seventh inning, LIU made a push to comeback on the Colonials as they scored three runs to make it a 6-5 game with a three-run homerun. RMU stopped the comeback making the third out of the inning on a play at the plate as senior catcher Samantha Santillo took a pass from outfielder Tess Apke and tagged out the LIU runner who was looking to score to tie the game. Nicole Sleith received the victory improving her record to 17-8.

RMU 3 (21-17, NEC 9-0), Wagner 2 (9-22, 1-12): Late Sunday morning at the North Athletic Complex at Robert Morris University, the Colonials continued NEC play as the Seahawks of Wagner came into town for a double-header. The first three innings were quiet as both teams did not score a run but Wagner started the scoring in their top half of the fourth inning by scoring the first run of the ball game with a homerun that went over the left field wall. However, RMU answered in the same inning as freshman Olivia Lorrusso singled home junior Haileigh Stocks and senior Tess Apke. RMU would receive an insurance run in the fifth inning via Lauren Hackett crossing plate after a throwing error by the Wagner catcher. Wagner would go onto score another run in the sixth but RMU was able to finish game one with the W. Senior pitcher Nicole Sleith earned win number 18 on the season with her performance in the circle as she only allowed two runs while striking out five Seahawk batters.

RMU 15 (22-17, NEC 10-0), Wagner 1 (9-22, 1-13): In game two of their double-header Sunday, the Colonials only needed five innings to defeat the Wagner Seahawks. The Colonials got the bats going in game two as they finished with 14 total team hits. RMU pounced on the Seahawks early as they saw eight players cross the plate in the opening frame. The Colonials would go onto score three more runs in the bottom of the second inning and five runs in the third inning. Both Ashley Gerhart and Sam Santillo recorded three RBI’s in the contest. Junior pitcher Haileigh Stocks received the win for the Colonials as she gave up only one earned run over three innings of work. Stocks improved to 4-7 on the season.

RMU 9 (9-5, NEC 2-3), Central Connecticut State 8 (4-10, NEC 1-4): Sunday afternoon at Joe Walton Stadium at Robert Morris, the Colonials picked up their second NEC victory with a one-point goal against Central Connecticut State. Senior Emma Baukhages paced RMU with three goals on the day. Senior Kristin Yoviene and junior Brittany Byerly both finished with two goals. The Colonials took a two-goal advantage with them into the locker room at the half as Baukhages scored two goals near the end of the first half of play. CCSU would score four goals in the second half but one of Kristin Yoviene’s two goals tied the contest up at eight and a goal by junior Emily Jamison with 57 seconds left in regulation secured the conference victory for Robert Morris. Sophomore Hallie Yancey was in net for the Colonials and she made five saves while earning the win.