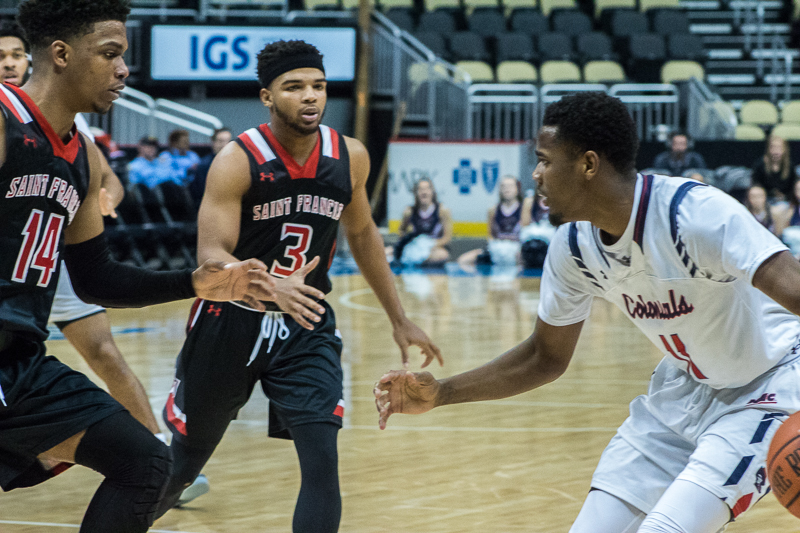 Before the game against the Wagner Seahawks on Jan. 20, the Colonials (12-8, 6-1) were in first place in the Northeast Conference (NEC) and looked to be on their way to win the regular season title. But since that game in which they lost 62-49 at Wagner, the Colonials have struggled. Since then, Robert Morris has lost seven of their last 10 and have dropped all the way to the seventh seed in the upcoming NEC Tournament.

And it is not like the Colonials are losing close games either.

Anybody that follows Robert Morris men’s basketball has to be asking the same question:

Before facing off against Wagner the first time, the Colonials averaged 72.3 points per game. After the last game against St. Francis (PA) on February 24, the Colonials averaged 69.3 points per game. In college basketball, three points can make a big difference in deciding the outcome of the game. Without scoring consistently, it is difficult to win basketball games against good teams. 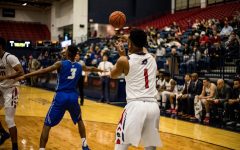 Out of the 10 games Robert Morris played to finish off their season, they shot less than 40% from the field five times. An average for shooting percentage in the NCAA is about 45 percent. This year, overall, the team shot 41 percent from the field. That statistic puts Robert Morris as one of the worst shooting teams in the NCAA, ranking 321st out of 351 Division 1 teams. To put how poor Robert Morris shot in perspective, Pitt, a team who is arguably the worst Power 5 basketball teams in the nation and has yet to win a conference game, is ranked 323rd. Robert Morris, a team that looked promising at the beginning of the year, cannot expect to make it to the “Big Dance” if they are one of the worst shooting teams in the nation.

The Colonials have turned the ball over 460 times this year. That is 14.8 turnovers per game. That turnover statistic puts Robert Morris at 311th out of 351 teams. With the team’s inability to hold onto the ball in crucial games, they allow other teams to score points at will. In the last ten games that Robert Morris played, they have had at least 13 turnovers in eight of those games. Although very talented, the team cannot figure out how to hold onto the ball.

Being able to distribute the ball in basketball is a vital part of the game. The Colonials only average 11.5 assists per game this season. In the last 10 games, the team has gotten 10 or less assists in four different games. Most teams in the NCAA average well over 13 assists in each game they play. RMU’s assist/turnover ratio is also well-below average this season too at .776. If a team wants to be successful the number for assist/turnover ratio has to be at least 1.

What Happened to Leondre Washington?

After such a promising start to the season, freshman guard Leondre Washington seems to have fallen off. An injury kept Washington out of two games but, Washington only played 10 minutes in a loss against Central Connecticut State on Feb. 17 and seemed to be displeased with his playing time coming off of the bench. Because of this, he chose not travel with the team to play against Mount St. Mary’s and St. Francis (PA). He has only scored 52 points in the last month and that may be a concerning factor going forward. The Colonials need his energy and shooting on the court in the NEC Tournament.

It is unfair to say that freshman forward Koby Thomas had a bad regular season. On Feb. 27, the NEC released their yearly awards.

Koby Thomas was NEC Rookie of the Year.

That is an extremely big honor for any player. He is the first RMU player to receive that title since Marcquise Reed did in 2015. But, Thomas has struggled in the last 10 games. After posting 20-point games six times this season prior to the game against Wagner on Jan. 20, Thomas has been unable to do that one time in the last ten games. The Colonials seem to have no problem winning when Thomas was scoring and if the Colonials want to beat Mount St. Mary’s on Wednesday, Thomas will have to replicate what got him that NEC Rookie of the Year title.

Obviously, things cannot go perfectly in a season. Injuries occur and players can go through shooting slumps. But, the Colonials have definitely not played to their potential in the last 10 games. With poor shooting and an inability to hold onto the basketball, Robert Morris lost seven of their last 10 games. The nice thing about basketball is that when the postseason rolls around, teams can go on runs and make it to the NCAA Tournament. The Colonials can 100 percent beat every team in the NEC, but if they play like they have been, Feb. 28 may be the last game of their 2017-18 season.