What you need to know about the Colonials: RMU defense seeing major improvements 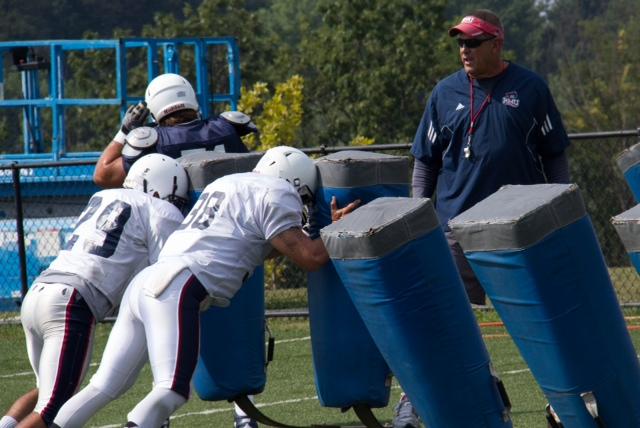 The defensive side of the ball looks to be the stronger of the two for the Colonials coming out of camp this year. Highlighted by a talented secondary consisting of last season’s Northeast Conference Rookie of the year, Marcelis Branch, the RMU defense is looking stronger than ever.

“This is probably the best defensive backfield we’ve had in years,” said head coach Joe Walton. “We’ve got excellent corners and some backups that would be playing on a lot of teams. The safeties are experienced and pretty sharp. I think it’s really going to help us.”

A big stress for Branch will be to try and avoid the usual sophomore slump that most athletes go through coming off a strong freshman debut. Branch has been continuing to focus on getting better, and with technique improvement imminent, he looks to build on last year’s promising season.

“I’ve just been listening to my coaches and doing my job. They’ve been telling me to block everything out and not to do too much, but just my job,” said Branch. “The secondary’s going to be great.”

An important piece to Branch’s improvement will be junior defensive back Antwan Eddie, who has served as the sophomore’s mentor since he arrived at RMU. Eddie, a proven reliable corner, has continued to preach that he has high expectations of his fellow defensive back.

“I’ve just telling him that it gets easier if he works harder,” said Eddie.  “He can’t slack off or the competition is going to get harder. I keep telling him that I can’t just have a corner on the other side of the field, I need a great corner.”

Alongside the secondary, the linebacker position seems to be the defense’s strong suit. They probably contain the most depth out of any position the team with the addition of North Texas transfer Mike Stojkovich to returning starters Kyle Cooper, Mike Cook, and Mark Centofanti. The Colonials run a 3-4 set, which relies heavily upon the linebackers to make plays. Assistant coach John Banaszak alluded to the linebacker position as the biggest surprise he’s seen through camp.

“Mike Stojkovich is a heck of a football player,” said Banaszak.  “The young kids are challenging the veterans and that competition [for linebacker] has been very impressive throughout camp.”

The defensive line continues to be the biggest question of the three groups on defense. The loss of defensive end Nolan Nearhoof, last season’s leading tackler, will definitely be felt, especially in the pass rush. The Colonials have Farren Masson returning, along with experienced veteran R.J. Cook.

It looks as if the Colonials will have to rely on their defense to keep them in games this season, but they have the talent and the numbers to do so. The question is, can they can stay healthy?