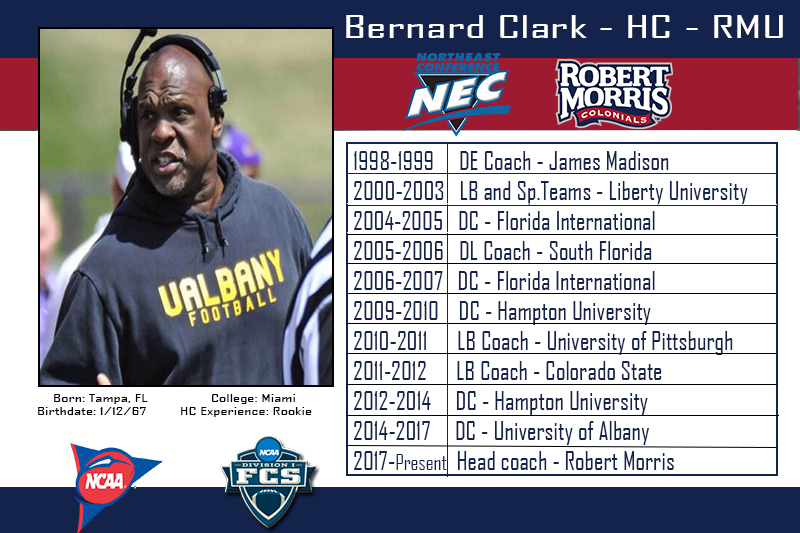 Bernard Clark will be the third head coach of the Robert Morris University football program, recently being hired to take over the program after the resignation of John Banaszak.

However, one may ask, who is Bernard Clark?

Clark played collegiate football at the University of Miami from 1985-1989. As a linebacker, Clark helped the Hurricanes earn two National Championships as well as being named the MVP of the 1987 Orange Bowl. Post-college, Clark took his football talents to the professional level.

Clark began his professional career in the National Football League in 1990 with the Cincinnati Bengals, being drafted in the third round. Clark then went west to play for the Seattle Seahawks in 1991 before returning to Cincinnati later that year. After his NFL career, Clark moved to the Arena Football League where he played with the Orlando Predators for two seasons.

Clark then decided to take his football knowledge to the coaching side of the game. Clark’s collegiate coaching career has been one of back-and-forth action. Clark began his collegiate coaching career with James Madison University as the defensive ends coach from 1998-1999. Clark served as a coach at Liberty University from 2000-2003 as the linebackers and special teams coach. Clark went south to Florida International University serving double-duty as the defensive coordinator and linebackers coach from 2004-2005. Clark left FIU briefly to serve as the defensive line coach for in-state foe, the University of South Florida for the 2006 season before returning to FIU in 2007.

Clark then made a stop at Hampton University for one season as defensive coordinator in 2009 before leaving to serve a stint as the University of Pittsburgh’s 2010 linebackers coach.

Clark then headed west to Colorado State University, serving as the linebackers coach in 2011. he then headed back to Hampton University for two seasons in 2012 and 2013, before heading to the University of Albany where Clark has spent the past four seasons.

Clark served as the assistant head coach and linebackers coach in his first season with the program in 2015 before being promoted to associate head coach in 2015, gaining the duty of defensive coordinator. Clark held this position before being hired to take over the helm of the Robert Morris football program.

RMU’s defensive play the past four seasons is one part of the team’s play that has been at the top of the Northeast Conference. The team’s defensive play is notable to acknowledge Clark’s defensive success at the University of Albany while playing in the Colonial Athletic Association.

During the 2017 season, Clark’s defense was tied with the University of New Hampshire for the fourth-best scoring defense in the conference with 17 touchdowns and 150 points for an 18.8 average. Clark’s 2017 defensive squad also finished fourth in pass defense, only allowing 134 completions of 217 attempts, allowing only nine pass touchdowns as well as allowing opposing offenses to average 176.9 yards through the air.

Overall, Albany’s defense finished second behind James Madison University in total defense during the 2017 campaign in the CAA, giving up an average of 296.5 yards a game.

Clark’s collegiate carousel has led him to Moon Township, Pennsylvania, as Athletic Director Dr. Craig Coleman has tasked him with the duty of turning around the RMU football program.