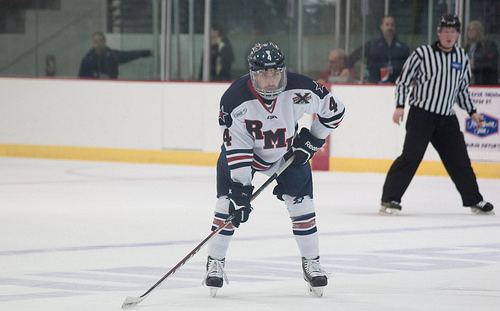 The first word was used by head coach Derek Schooley to describe the mood of the #20 Robert Morris Colonials coming into the Atlantic Hockey Championships in Rochester, New York.

The latter was the adjective used to describe how the Atlantic Hockey Conference Regular Season Champions felt after Mercyhurst senior Zac Frischmon sent a wrist shot passed the glove of RMU Dalton Izyk 3:04 into OT to send the Lakers to the Atlantic Hockey Finals, and bring Robert Morris’ record breaking season to a screeching halt in heartbreaking fashion on a Friday evening at the Blue Cross Arena.

With 35 seconds left in regulation, and goaltender Brandon Wildung on the bench for a sixth attacker, senior Chris Bodo blasted a shot passed the blocker of Dalton Izyk into the back of the net, sending the Laker faithful at the Blue Cross Arena into a frenzy as Bodo put the Lakers back into the Atlantic Hockey Championship against RIT Saturday night.

The Tigers, in front of a home crowd, took care of Canisius 2-1 in the other semifinal.

Led by a remarkable 59-save performance, freshman goaltender Brandon Wildung has been the Lakers starter since an injury took starter Jimmy Sarjeant out of the line-up for the season.

Wildung, who hails from the town of Nassau, Minn. (population: 74), turned aside 26-of-27 shots in a second period, as RMU outshot the Lakers 27-6 in the middle frame.

“They’re [RMU] a very good team, they throw a lot at the net. I try to just focus and tried to just make that first save, sometimes I didn’t have the rebound that I wanted but my defensemen did a great job of clearing pucks out and really helping me out with controlling the second opportunities,” said Wildung.

The No. 4 seed Lakers, who returned to Rochester for the fourth straight season and sixth time in eight seasons, wasted no time jumping on a Colonials squad returning to upstate New York for only the second consecutive season.

Robert Morris took two penalties in the game’s first five minutes, and the Lakers took advantage as seniors Kyle Just and Ryan Misiak both scored on the power play to put the Colonials in a 2-0 hole just 6:50 into the game.

RMU Junior Zac Lynch countered for the Colonials on their first power play opportunity of the first. For the Pittsburgh-native, it was his 40th point of the season and 101st of his career.

The second period turned into the Brandon Wildung show as he made a few marvelous saves for the fourth-ranked offense in NCAA Division 1 hockey.

With under a minute left in the second period, and in need of a serious momentum shift, it was captain Cody Wydo who came to the rescue.

In what would become his final game in an RMU sweater, the Southgate, Mich. native put the puck past Wildung to tie the game and give momentum to the Colonials going into the final period of regulation.

In the third it would be another Colonial playing in what would be his final game for RMU to put them in the lead. Scott Jacklin played a puck off a John Rey shot that Wildung couldn’t track, and Jacklin put home his 14th goal on the season.

Following the dramatic fashion in which the Colonials season ended, coach Schooley was proud of his team buying to his pregame message, regardless of the outcome on the ice.

“I’m really proud of our guys. I said before the game that we didn’t wanna have any regrets. If we got beat, we got beat. And we didn’t have any regrets tonight. I mean there are obviously regrets of not scoring, but it’s not like we went out there and laid an egg. We responded being down 2-0 very early,” said Schooley, who the day before was named Atlantic Hockey Head Coach of the Year for the first time in his career.

In a contest where the Colonials outshot the Lakers 62-29, RMU somehow walked away from the contest losing. Coach Schooley used nine simple but well-known words in the hockey world to describe what happened during the contest Friday evening.

“Unfortunately, the hockey gods were not with us tonight.”

Mercyhurst will look for a return trip to the NCAA Tournament Saturday night as they take on the RIT Tigers, who will have the home crowd advantage with their campus only 6.7 miles from the arena in downtown Rochester. Puck drop is set for 7:05 p.m.