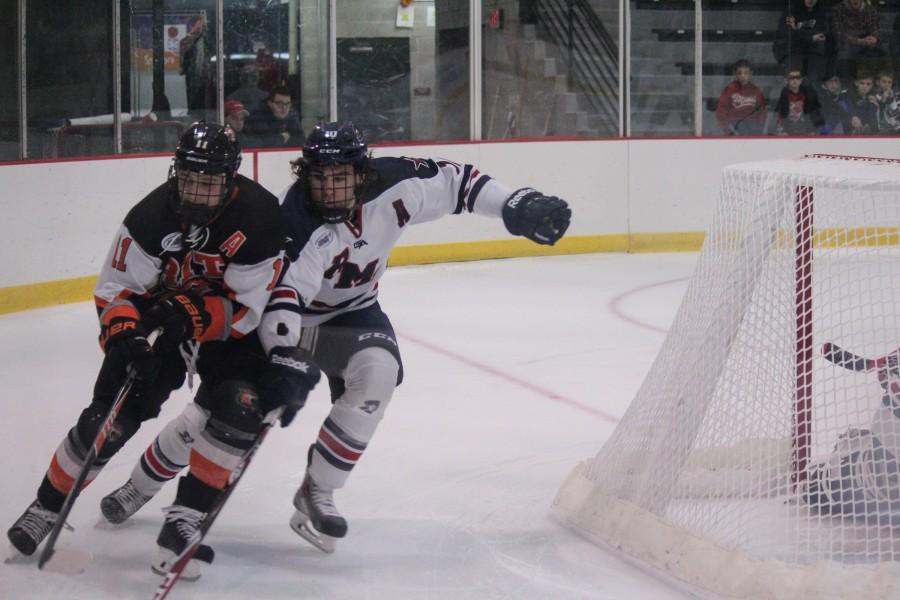 The best offense is a good defense. Or is it the best defense is a good offense? It’s difficult to tell with the RMU men’s hockey team, since it toes the line when it comes to offensive prowess.

Redshirt-junior defenseman Tyson Wilson skated in his first full series against RIT this past weekend. He was out six months recovering from hip surgery.

“It was a little nerve racking at first,” said the assistant captain. “I was excited to play so Friday night I think I was a little too excited and Saturday I settled down and felt better in the game.”

“Recovering from surgery is difficult but he skates extremely well, he’s a dynamic offensive defenseman when he has the puck and he’s good defensively so it’s definitely good to have him back in the lineup,” said head coach Derek Schooley.

In his first three games back, Wilson has accumulated nine shots and four blocked shots, along with seeing plenty of ice time on even-strength as well as special teams.

The defensive corps is epitomized by the pairing of Wilson and John Rey. The two played next to each other last season and picked up right where they left off this season.

“We feed off each other pretty well,” said Rey, who currently leads defensemen in shots with 14. “We have the same offensive instincts out there so it makes it easy to know where he’s at and for him to know where I’m at.”

Schooley’s ideal defense is one that sticks to the attacking zone. Wilson and Rey are just that, setting a good example for the remainder of the young defense that’s helped the team reach a No. 18 national ranking.

Freshmen defensemen like Alex Bontje and Robert Powers are taking notes. The two have played in eight and five games, respectively. They’re exceeding freshman expectations, which pushes the rest of the team to increase performance.

“Younger guys come in, they’re always looking for spots so they’re always pushing you, and I think that’s helped just seeing how much they want it,” said Wilson. “They have the skill to play here, its just a matter of time before they take over the older guys’ roles.”

Collectively, the Colonial defense has blocked 77 shots. The team has only scratched the surface so far this season, leaving room for the budding defense to develop even more.

“I don’t think that our youth has hurt us at all, it’s only a positive because there’s only room to grow,” said Rey. “It’s just going to keep getting better each week and we’re going to keep coming closer together so it gets better.”