Women’s basketball closes season out with win over Saint Francis 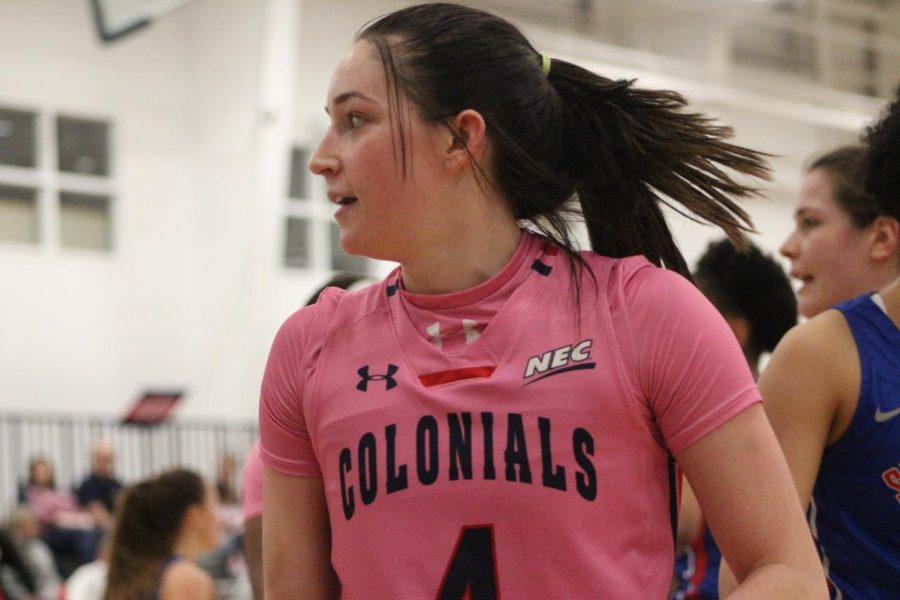 MOON TOWNSHIP — With just a little over four minutes remaining, the Robert Morris Colonials (19-10, 16-2) were clinging to a slim four-point lead, 54-50, against in-state conference foe Saint Francis (14-16, 11-7). Then the hero of their last clash took control. Nina Augustin made a three-pointer and the Colonials rode that momentum to a 66-53 win.

The three balls were falling for the Colonials early in this game. RMU’s Nina Augustin picked up right where she left off the time the in-state rivals matched up. Augustin made back-to-back triples while Isabella Posset and Nadege Pluviose added buckets of their own as the Colonials jumped out to an early 11-0 lead.

The Red Flash’s first points came with 4:44 points remaining in the first quarter. A Haley Thomas three-pointer opened the scoring for Saint Francis.

The extra possessions gave RMU the lead heading into the second quarter, 16-8.

Saint Francis had no answer for the Colonials from behind the arc. Five different Robert Morris players made a three-pointer in the first half and RMU shot the ball at a forty percent clip in the half.

The Colonials defense continued to look good in the second quarter. Saint Francis had to work hard for their buckets especially on the inside as Robert Morris finished the first half with five blocks.

The most impressive being a Nneka Ezeigbo block with 2:41 remaining in the first half. Saint Francis’ Aunesha Williams challenged the taller Ezeigbo and the ball was smacked into the fourth row of the bleachers.

The two teams picked up the pace offensively in the second half. At the halfway point of the third quarter, the teams combined for nineteen points. The Colonials lead shrunk to nine.

As the two teams headed into the forth and final quarter, Robert Morris continued to lead 48-41.

The Red Flash did not go away quietly. Saint Francis continued to battle to keep themselves in this game. A deep three by Courtney Zezza cut the Colonials’ lead down to just four.

With just a four point lead, 54-50, Nina Augustin took over. The Finland native knocked down a deep three. On the next possession, Augustin found Honoka Ikematsu for a short corner jump shot.

The Colonials never looked back. The lead was trimmed down to six thanks to a Leah Morrow at the 2:17 mark. These would be the last points the Red Flash for the rest of the game.

Robert Morris ended the game on a 7-2 run.

When the final buzzer sounded, the Colonials finished off Saint Francis, 66-53. The Colonials never trailed in this game.

RMU was led by a pair of young point guards. Sophomore Nina Augustin finished her regular season with 14 points while freshman Isabella Posset ended the night with 13 points and four assists.

“(The coaches) would say you guys aren’t freshman,” explained Posset. “ It’s always time to step up. I always had that mentality in my head. I am a freshman but I can’t play like a freshman. As a team, we have to play like we’ve been playing for years.”

Even though the Colonials won by 13 points the game seemed closer than the scoreboard represented.

“Sue’s a great coach,” said RMU head coach Charlie Buscaglia. “With her being at the helm, she’s definitely done some really good things with them as far as defensively. They tipped a lot of passes. They changed up how they guarding certain spots on the floor.”

The path to the NEC crown has to come through Robert Morris. The Colonials first obstacle comes in the form of Fairleigh Dickinson. That game is scheduled for Monday, March 11.