Women’s basketball hangs on for win against Bryant 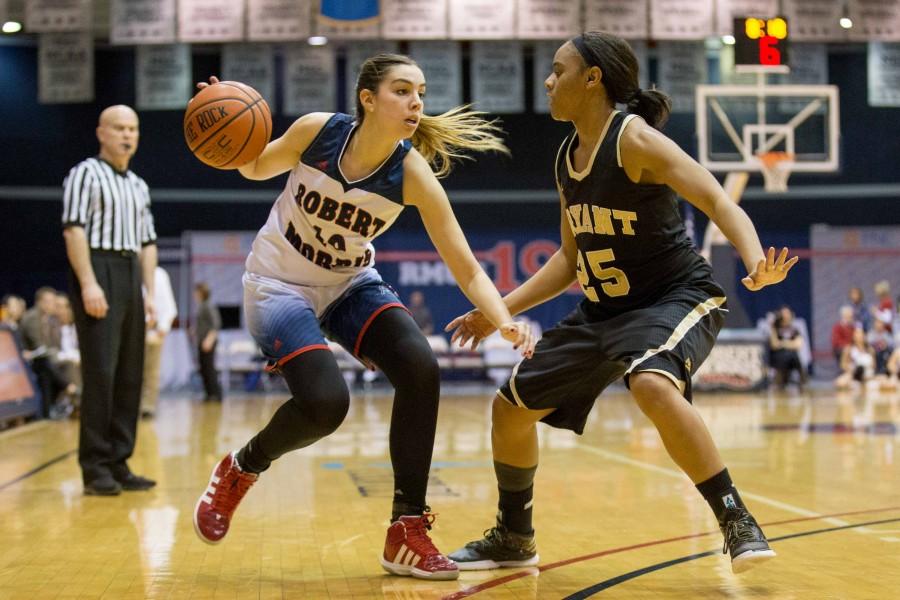 In a game that lived up to its billing, the Robert Morris women’s basketball team (9-11, 7-2) defeated the Bryant Bulldogs (14-6, 7-2) Saturday afternoon at the Charles L. Sewell Center to climb into second place in the Northeastern Conference.

“All week we talked about this game. This is a game we had to win in order to move forward and go where we want to go,” said guard Ashley Ravelli.

Leading the charge was sophomore standout Anna Nikki Stamolampou, who poured on a career high 28 points, including a 7-of-8 performance from outside the three-point line.

“I started in the warmups and I felt kinda sore. Janee Brown came up to me and said ‘don’t worry, you’re gonna make every shot.’ I guess I was just feeling it. It was my day,” said Stamolamprou.

In a game that featured only two lead changes, the Colonials dominated play throughout the contest. Tenacious defense generated 16 Bulldog turnovers, leading to 22 RMU points.

It wasn’t until the final three minutes of the contest that things actually got interesting. After Megan Smith fouled out, the Bulldogs began to press the Colonials relentlessly, storming back from a nine point deficit with just over two minutes left in the contest.

Coach Sal Buscaglia called a timeout, then his team proceeded to break the Bulldog’s press and get the ball to their captain,  Ravelli, with just seven seconds left, and a chance to make two free throws.

“I just had to make them. No excuses,” she said.

Ravelli finished with 13 points on the day, including a 7-of-7 performance at the charity stripe. She has missed just one from the free-throw line all year.

Up next for the Colonials is a special 10 a.m. home contest against Farleigh Dickinson on Monday.