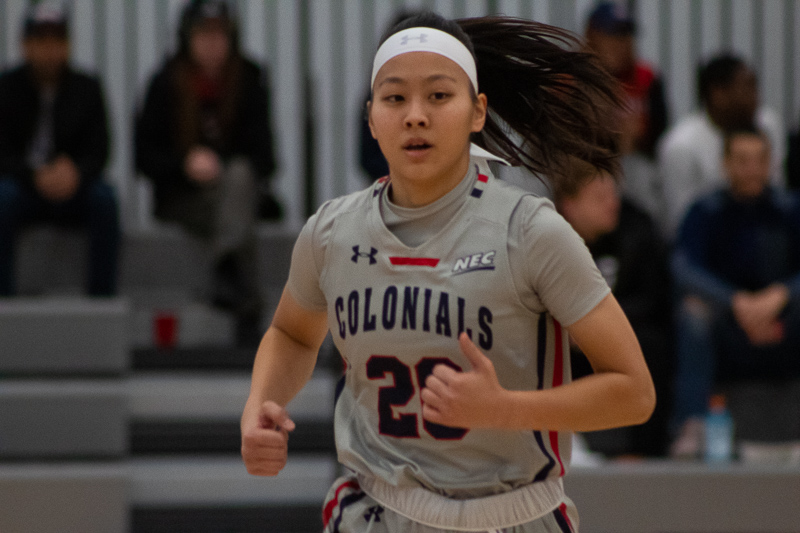 MOON TOWNSHIP — The Robert Morris women’s basketball team (21-10) weathered the comeback attempts of Mount St. Mary’s (15-16) to move on to the NEC tournament finals. The final score was 69-65.

The Colonials’ offense looked out of sorts in the first two and a half minutes of the game. Mount St. Mary’s was able to build a five-point lead early on the Colonials.

Robert Morris came storming back though as Nneka Ezeigbo and Isabella Posset propelled RMU to a 10-1 point run. Ezeigbo had seven of the ten points during the run.

During the first quarter media break, the Mount made a defensive change. The Mountaineers came out in a press and were able to slow down the Colonial offense. RMU only managed four points for the remainder of the quarter.

When the buzzer sounded to signify the end of the first quarter, the Colonials held a slight 14-9 lead. Ezeigbo went into the break with nine points. The Colonials defense was able to force MSM to shoot just 1-11 from the field in the quarter.

The Mount came out in the second quarter and continued to showcase the press on the defensive side of the ball. This helped the Mountaineers keep pace with the Colonials. Robert Morris tallied 19 points in the quarter while MSM was able to put in 17 points.

“It wasn’t necessarily to press,” said Mount St. Mary’s head coach Maria Marchesano. “We just tried to mix things up on them. We didn’t do the little things in those presses and they got some easy buckets.”

In the first half Mount Saint Mary’s was carried by Juliette Lawless and Rebecca Lee. Lawless was able to score nine points by half-time. Lawless did, however, find herself in early foul trouble. The senior guard had three fouls at the break. Lee registered seven points and pulled three rebounds.

The Colonials maintained the lead, 33-26, heading into the third frame.

During the final stretch of the regular season, the story of the Colonials was how the offensive output from Augustin complemented the dominating play of Ezeigbo. This game was no different. Coming off a game in which both players scored 13 points, both players crossed the double-digit scoring threshold by the halfway mark in the third quarter.

An unlikely hero emerged for the Colonials in the third quarter in Esther Castedo. Castedo made three straight threes that gave the Colonials all the momentum heading into the fourth quarter.

The shooting woes from the first quarter came back to MSM in the third quarter. The Mountaineers were just 4-14 in the quarter. Mount St. Mary’s made only one of their six attempts from behind the arc.

The Colonials extended their lead to 15 points late in the third quarter thanks to four consecutive field goals. However, the lead was trimmed to 12 by the time the buzzer sounded. RMU was still in control though, 51-39.

“We were in striking distance,” said Marchesano. “At that last timeout, I said hey let’s just get it to six before the media. Then next thing you know its a four-point game.”

The Mount was able to flip the script in the fourth quarter. MSM rode a 16-3 point run, that started at the end of the third quarter, to get within six points of the lead.

“You can’t dwell on what happened,” said RMU head coach Charlie Buscaglia. “You have to figure out the couple things we were going wrong.”

Mount St. Mary’s would go away easy. The Mount fell back into the defensive press that they displayed all game and closed the gap on the Colonials. At one point the Mount used the defense to pull within four points of RMU.

The Colonials offense didn’t provide much help when they got the ball down the floor. RMU shot just one of five from the field during the Mount St. Mary’s onslaught.

Augustin when to the line for the Colonials with just 32 seconds remaining. She was only able to make one of the two free shots. Facing a deficit of five points, the Mount’s Bridget Burkhead drilled a three off an inbound play cutting the lead to two.

With 16 seconds remaining in the game, Nneka Ezeigbo converted an and one to push the lead to 67-65. On the ensuing inbound play, Michaela Harrison made a turnaround three point jumper which tightened the score to 67-65.

Honoka Ikematsu and Nina Augustin each made a free throw to seal the win for the Colonials. The final score was 69-65.

Nneka Ezeigbo lead all scorers with 23 points. Marchesano spoke of the challenges of game planning against Ezeigbo.

“We wanted to front the post all night long, but unfortunately our backside help was nonexistent tonight. The biggest thing is that you don’t want Nneka to catch the ball because if he catches it, it’s probably two points.”

“It’s always good to have good to have your efforts noticed,” said Nneka Ezeigbo. “I’m just here to play for my team.”

Robert Morris had advance to host the Saint Francis Red Flash in the NEC Tournament finals. The Colonials hope to hoist the NEC trophy after their Sunday matinee. Tip-off is set for 2:00 p.m.