Women’s basketball rides huge 1st half to win over Xavier 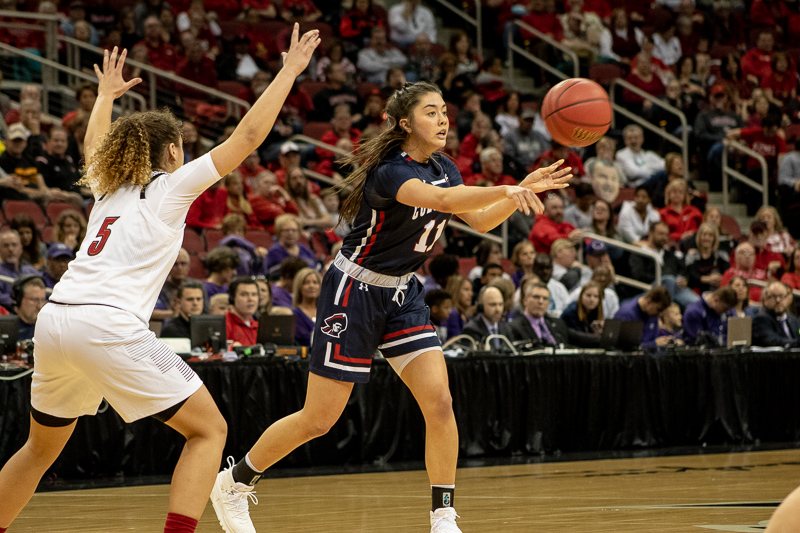 Natalie Villaflor sends over the pass during her career day in the first round of the NCAA tournament. Louisville, KY March 22, 2019. (Samuel Anthony/RMU Sentry Media)

MOON TOWNSHIP– The RMU women’s basketball team (4-3) led all but 21 seconds during their 71-57 win over the Xavier Musketeers (1-5) on Sunday. It was a dominant first-half performance from the Colonials, as they held the Musketeers to just 17 points while putting up 42 of their own in the first 20 minutes.

The Musketeers were abysmal in the first half offensively, with numerous bad passes and offensive fouls in addition to shooting 33%. The Colonials were all over Xavier defensively, causing 16 turnovers and scoring 21 points off of them.

Coach Buscaglia praised the effort of his team defensively, “[We’re] just being more accountable on defense than we’ve been, so the mentality to come out and set the tone was there… we were doing a good job at digging into the gaps causing tips and loose balls and getting to those loose balls first.”

Sophomore guard Natalie Villaflor said that “A lot of it is our communication, we worked a lot on that this week.”

On the offensive side of the court, it was an air show from the Colonials as they buried 11 total three-pointers in the game. Aside from Nneka Ezeigbo’s team-leading 16 points, the RMU attack came from the outside, with four different Colonials knocking down two threes in the game, including Villaflor who went 2-2 from downtown. On the importance of developing the deep ball, Coach B said that “You just keeping working on it in practice, making sure you become better shooters with better fundamentals and continuing to get a better pace… it’s just staying [faithful] to what we do and continue working hard, that’s what’s going to get us to better shooting performances.”

With Ezeigbo running into some foul trouble early, the RMU bench had a big game, led by Villaflor’s 10 points.

Coach B stressed the importance of having a solid bench, “It’s important to have a deep rotation, when you have [one] you have the ability to go to different players that can serve the team in different ways… it was great to see quality minutes [today].”

Also stepping up today was junior forward Holly Forbes, putting up 11 points in a 35-minute marathon performance from her, as well as freshman Dahomée Forgues, who made her second start for RMU with six points after scoring nine in her last game. Forgues said of her stepping into the team, “It’s a good team, and I’m happy to be here and getting some minutes. We played really strong [today] as a team and it was great.”

The Musketeers made a valiant effort to come back in the second half, dragging the RMU lead to as low as 11 points, though the hole they dug was much too large to return from, as the Colonials closed out the game 71-57.

On getting open looks on offense for herself, Villaflor said that “[We] just worked through our offense, our team does a really good job at moving the ball around, a lot of [my performance] was our ball movement and communication.”

The Colonials will rest over the next six days before their next match against Delaware (2-4) on Saturday at the UPMC Events Center.