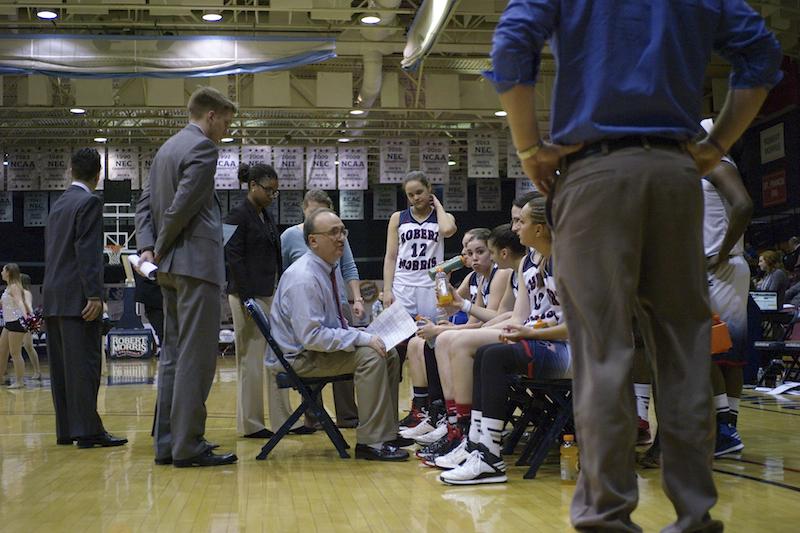 Head Coach Sal Buscaglia coached his final game at Robert Morris Saturday against #1 seed UConn in the NCAA Tournament. The Colonials finished the 2015-16 season with a 20-13 record.

UConn 101 (33-0), RMU 49 (20-13): Robert Morris took on the top-seeded Connecticut Huskies in the opening round of the Women’s NCAA Basketball Tournament in Storrs, Connecticut late Saturday morning. However, the Huskies ended RMU’s season with a 101-49 victory.  The Huskies held a 64-15 halftime lead, but the Colonials didn’t stop fighting in the second half. RMU outscored UConn 25-16 in the fourth quarter to give them 49 points in the game after being down 85-24 at the end of third quarter. Junior Anna Niki Stamolamprou led RMU offensively, scoring 11 points. Senior Ashley Ravelli wasn’t far behind, scoring eight points in her final game in a Robert Morris uniform. The Colonials shot 38.3 percent from the field and 45.0 percent from beyond the three-point arc. Along with it being the seniors’ last game, it was Head Coach Sal Buscaglia’s final game at Robert Morris, having announced his decision to retire at the end of the 2015-16 season. Coach Buscaglia led RMU to a 20-13 season record and an NEC Championship victory over Sacred Heart, which earned the Colonials the opportunity to play in the NCAA Tournament.